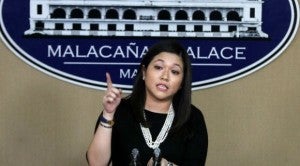 MANILA, Philippines—Following a much-criticized visit of military and health officials led by acting Health Secretary Janette Garin and Armed Forces chief General Gregorio Catapang Jr. to the quarantined peacekeepers on Caballo Island, Malacañang on Wednesday declined to comment on a suggestion of a senator to let Garin wear protective gear when the Senate tackles the budget of the Department of Health next week.

Senate acting Minority Leader Vicente “Tito” Sotto III said that Garin should wear protective gear when she appears before the Senate for the plenary debates on the health department’s budget.

“Hindi na po kami magbibigay ng komento doon sa proposal nila. (We will not further comment on their [Sotto’s] proposal). What we are stating here, as a matter of fact, would be the protocols that are followed not just by us but also by other countries that are in the process of preparing their countries or at least the countries that already have Ebola cases,” Deputy Presidential spokesperson Abigail Valte said in a press briefing.

Valte cited views of health experts saying that wearing a protective gear is only necessary when dealing with a patient who have exhibited symptoms of the deadly Ebola virus.

(As far as I know, a health worker needs to wear protective gear if he is dealing with a patient who has already contracted Ebola or has shown symptoms of the virus. But according to health experts we have consulted, wearing PPE (personal protective equipment) is not necessary when talking to a patient who is not exhibiting symptoms.)

In a statement, Garin said that she visited the peacekeepers last November 16 to show to the public that the troops should be feared and to ensure that their medical needs are met.

“It is also my duty to allay the fears of our Peacekeepers and help address their medical concerns. We held a discussion with our soldiers and answered the questions they raised,” Garin said.