MANILA, Philippines —The children of accused pork barrel scam mastermind Janet Lim-Napoles refused to enter any plea during their arraignment for graft at the Sandiganbayan on Wednesday.

James Christopher and Jo Christine said they refused to enter a plea in the 15 counts of graft each filed against them upon the advice of their counsel. The court thus entered a not guilty plea for both.

On their way to the courtroom earlier, the siblings shunned reporters and used folders to cover their faces.

In the commotion, James Christopher bumped his head on the door as he entered the court. His sister appealed to reporters to respect their privacy.

Napoles’ children are coaccused in the graft case against Senator Juan Ponce Enrile for the alleged funneling of some P345 million in pork barrel funds to fake foundations set up by their mother. Enrile is under hospital detention for plunder. 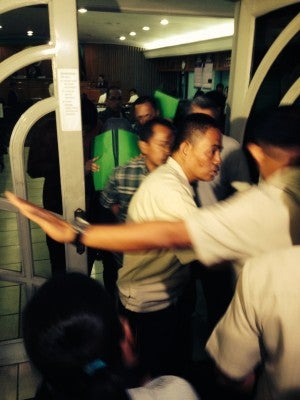 James Christopher and Jo Christine, the children of accused pork barrel scam mastermind Janet Lim-Napoles, covered themselves behind green folders after their arraignment for graft over the pork barrel scam. The Sandiganbayan entered a not guilty plea as they refused to enter a plea for 15 counts of graft each. MARC CAYABYAB/INQUIRER.net

Budget Undersecretary Mario Relampagos and his staff Rosario Nuñez, Lalaine Paule and Marilou Bare also did not enter a plea during Wednesday’s arraignment. Respondents Rodrigo Galay, Hernani Dichon and Laarni Uy, on the other hand, entered a “not guilty” plea.

Napoles’ children earlier asked the court to dismiss the charges against them. But the antigraft court junked their petition for lack of merit.

In their motion for reconsideration, the siblings said there was no evidence to show that they conspired with their mother in the alleged scheme to divert the lawmakers’ Priority Development Assistance Funds (PDAF) to ghost projects for kickbacks.

They also said the evidence tagged the whistleblowers as being the officials of the dummy foundations used in the scam.

The accused then pinned the blame on the whistleblowers who admitted a hand in the scam but were given immunity from charges for testifying.