Only Ayalas didn’t give Binay condos–Mercado 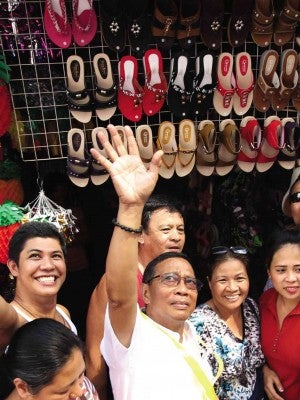 BINAY IN BULACAN Vice President Jejomar Binay waves to the crowd during his visit to the public market of Malolos, Bulacan province, on Monday. NIÑO JESUS ORBETA

The deal allegedly was that Vice President Jejomar Binay, then Makati mayor, would get a unit in most of the condominium buildings in the city in exchange for tax or permit concessions, except from those owned by the Ayalas, former Vice Mayor Ernesto Mercado testified on Tuesday.

Testifying at the resumption of the Senate blue ribbon subcommittee inquiry into supposed Makati irregularities, Mercado alleged that Binay used dummies to hide his ownership of these condominium units—a charge the Vice President’s camp denied.

As examples (mga halimbawa), Mercado cited six buildings where Binay allegedly had units and presented a notarized affidavit from Ariel Olivar, an engineer who admitted he was used as a front for Binay’s unit at The Peak condominium.

He said building owners supposedly agreed to demands for a condominium unit or two because they would be given adjustments in their occupancy permits so they would be free from paying real property taxes for a year.

The occupancy permits are used to determine the real property tax payments. If the date in the permit is adjusted, the developer could avoid paying taxes for a certain period. Most times, the amount of tax payments the developer could save for these would be greater than the price of a condominium unit or two, Mercado explained.

“If you could save P40 million if the start of the payment for the taxes is adjusted for a year, and you would be asked for a condominium unit or two worth P30 million, you would agree,” he said.

“That is the system why it is an open secret among those in Makati that Vice President Binay, when he was mayor, had a condominium unit per building. But it’s not 100 percent [of buildings], in fairness to him. Ayala won’t tolerate that,” he added.

Mercado also said that even in getting building permits from Makati, city engineers were making money.

He said developers would be told that the evaluation of their buildings might take three months following the working hours of city engineers. But permits would be given faster if they paid “overtime” for the engineers.

Most developers agreed to shell out the amount for “overtime” instead of waiting three months, he added.

Mercado also said Ayala Corp., which has interests in real estate, telecommunications and water services and has developed its property in Makati into the country’s central business district, was steadfast in resisting such schemes because it did not have to depend on the Makati government.

“What Ayala is saying is simple. It’s not the Makati government that developed us. In fact, we’re contributing to Makati because Ayala is in Makati City,” he said.

Without naming names, Sen. Alan Peter Cayetano said during the hearing he was told by a building owner that he was more than happy to give not just a unit but a whole floor to Makati City officials.

Cayetano said the owner, whom he did not identify, explained that this could save him money. For instance, the building owner may just have been allowed by a developer of an area to build a 20-floor building. If he wanted more floors, he would have to buy another piece of land to build another building.

But if the city government would allow him to turn his 20-story building into a 30- to 40-floor building, he would be able to save the cost of buying land and spending for a new building’s foundation.

“So what’s it to me to give one floor to those from City Hall if that’s what would happen,” Cayetano recalled the building owner as telling him.

In such an arrangement, Cayetano said, it’s the area developer who gets angry because the developer already has a plan on how the space and limited resources of an area are to be used and has already studied the density of the area.

Mercado also read into the record the statement of Olivar, who he said he had been in touch but who did not show up at the Senate on Tuesday. Olivar and the person who notarized his affidavit were invited by the subcommittee to appear in the next hearing.

In his affidavit, Olivar said he was not the beneficial owner of The Peak condominium unit.

Mercado said Binay had also allowed him to stay at this unit in 2001.

To support his claim that Binay owned the condominium units, Mercado cited the invoice from Le Triomphe which said these were addressed to the Makati City’s engineering department.

He said the Le Triomphe units were under the name of Celso Santiago, allegedly an uncle of Binay’s wife, Elenita.

He also said the owner’s representative for Le Triomphe was Ruben Sta. Ana who, he said, was the right-hand man of former city engineer Nelson Irasga.

“We can clearly see that the one making the transaction is the engineering department,” he said.

The condominium unit in Berjaya allegedly owned by Binay was also under Santiago’s name, he said.

Mercado also said Berjaya used to be owned by Manoling Morato, former chair of the Philippine Charity Sweepstakes Office, and alleged that Morato was given a tough time when he was arranging the permits for the building.

He said he witnessed Morato shed tears over the hard time the city government gave him, and suspected Morato gave more than a condominium unit.

“Manoling Morato was at the engineering office almost every morning and afternoon,” he said.

Binay’s alleged unit at the Perla Companio de Seguros was under the name of Benjamin Zapanta who, Mercado said, used to be a Makati City contractor.

He also alleged that the unit at the Prince Plaza II condotel was under the name of Santos Panlilio, another Makati contractor who used to be Binay’s favorite. The invoice from Prince Plaza II was also addressed to Makati, care of the city engineer’s office, he said.

The unit at the Avignon Tower was under the name of Aurora Panlilio, Santos Panlilio’s wife, Mercado alleged.

Binay faces yet another probe, this time over BSP-private firm joint venture

Read Next
Aquino keeps an open ear on LP’s standard bearer for 2016 elections
EDITORS' PICK
What to watch out for when selecting a video surveillance solution
Heads may roll at BOC, says Palace if sugar smugglers are allowed to use recycled import permits
vivo brings to the Philippines a powerful smartphone with a slimmer body, the vivo Y02s for only PHP 6,499
DOH reports increase in daily COVID-19 deaths, mostly unvaxxed
Palace: Biggest supermarkets in PH commit to sell sugar at P70 per kilo
House energy committee chair Arroyo bats for cheap electricity
MOST READ
DepEd to give teachers P5K cash allowance within first week of classes
Alyssa Valdez to miss Creamline’s AVC Cup campaign
DOJ indicts bank officer in $2.1 billion Wirecard fiasco
GSIS cool to idea of lowering retirement age in PH
Don't miss out on the latest news and information.