It’s full speed ahead for Binay 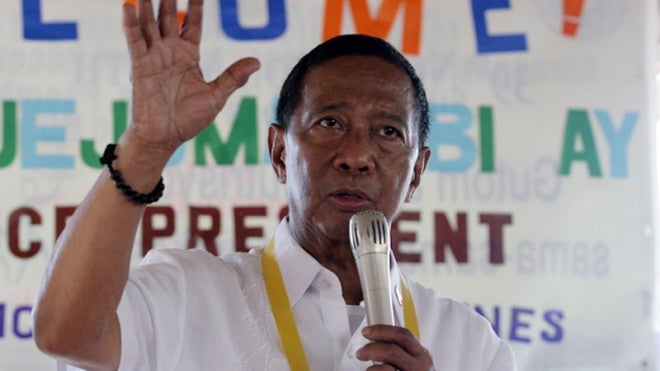 MANILA, Philippines–Faced with the prospect of impeachment, Vice President Jejomar Binay has reminded the senators who are investigating him on charges of corruption to be mindful of their role as potential judges in an impeachment trial.

Despite those charges that have pulled down his ratings, Binay has also reaffirmed his decision to seek the presidency in 2016.

In an affidavit submitted to the Senate blue ribbon committee on Nov. 10, Binay lamented that the senators had indicted him for “criminal wrongdoing” even as he questioned the Senate’s “power to expose.”

The Vice President disputed claims that the P2.28-billion Makati City Hall Building II, built when he was mayor of Makati, was overpriced. Otherwise, he said, the Commission on Audit (COA) would have issued a notice of disallowance.

“The hearing has veered toward false criminal accusations against me. It must be emphasized that the Senate shall constitute [itself] as the impeachment court in case the House of Representatives [impeaches me],” he said.

“Therefore, the senators are unmindful of their role as potential [judges. Worse], these senators are acting as prosecutors, judges and even as witnesses,” he added.

Binay faces charges of plunder in the Office of the Ombudsman over alleged overpricing in the construction of the P2.28-billion Makati parking building.

A Senate blue ribbon subcommittee is investigating those charges, and has expanded the inquiry to cover mounting allegations of corruption and ill-gotten wealth against Binay, including acquiring an 8,877-square-meter real estate property in Makati and a P1.2-billion, 350-hectare agricultural farm in Rosario town, Batangas province, through dummies.

Binay claimed that the inquiry had gone beyond the “scope of permissible areas” and subjected him and his family to a “trial by publicity.”

If at all, the inquiry was not the proper forum, and the accusations against them were “unsubstantiated” and based on hearsay, and “inadmissible evidence,” he said.

The Vice President accused the subcommittee of intimidating witnesses testifying on his behalf, and of coaching those who would “lie and fabricate testimonies” against him.

No power to expose

“Indeed, by immediately endorsing to the Witness Protection Program the persons making bare accusations against me, the subcommittee has effectively indicted me for criminal wrongdoings,” he said.

“In effect, they have induced and accepted as gospel truth the perjured testimonies of my political detractors,” he added.

Binay, who declined invitations from the blue ribbon committee and the subcommittee to appear at the inquiry to air his side, asserted that Congress had no power to expose “for the sake of exposure.”

“Legislative inquiries, unlike court proceedings, are not subject to the exacting standards of evidence essential to arrive at accurate factual findings upon which to apply the law,” he said.

Everyone, from the highest official down to the most ordinary citizen, has the right to be presumed innocent until proven guilty by a competent court, he stressed.

If at all, it’s the Ombudsman who has the duty to investigate any act or omission by any official when this appears to be “illegal, unjust improper or inefficient,” Binay said.

Citing the Supreme Court ruling in Neri vs. Senate Blue Ribbon Committee, Binay said it was not the job of Congress to investigate the culpability of officials.

Its role is to legislate laws, “not to determine anyone’s guilt of a crime or wrongdoing,” he said.

It also could not assume powers vested in prosecutorial offices and courts, he said.

It is neither a law enforcement nor a trial agency, he added.

The case should explain why he should not go to the hearings, he said.

Contrary to claims, Binay said, phasing the construction of Makati City Hall Building II, or splitting the contracts, with the conduct of bidding for each phase, is not prohibited by the Government Reform Procurement Act.

The procurement law, he said, prohibits splitting of contracts if the purpose is to avoid bidding, circumvent rules on alternative procurement, or circumvent limits of approving authorities.

In the case of the Makati building, bidding was conducted in each phase, in compliance with the law, he said.

And neither is the awarding of contracts to a lone bidder prohibited by the law, Binay said.

In Phase 1, the winning bidder won over two other bidders, while in Phases 2 to 5, the lone bidder was the same contractor, he said.

“Based on the records, there was no reason to disqualify [that] contractor,” he said, referring to Hilmarc’s Construction Corp.

“In each phase… there were no grounds not to award the contracts,” he said.

Binay also said the resident auditor in Makati did not issue an audit observation memo (AOM) or disallowances throughout the construction of the project.

“The implication of the nonissuance of AOMs or disallowances by the resident COA (auditor) for the aforesaid period is that there were no anomalies, and that all the requirements of the Procurement Act were complied with,” he said.

Each phase was subjected to contract review and technical inspection by the COA, Binay said.

National Statistics Office (NSO) data cannot prove that the building is overpriced given that the NSO based its computations on approved building applications and documentary requirements, he said.

“Purported costs of other buildings cannot prove that the Makati City Hall Building II is overpriced because there are different scopes of work, specifications, design and bills of material,” he said.

Binay said even Public Works Secretary Rogelio Singson had said that the actual cost of government buildings could not be compared with private buildings because they had different specifications.

Binay also played down the market value appraisals by Federico Cuervo and Davis Langdon and Seag Handbook, saying these could not prove the building was overpriced.

“[M]ere ocular inspection… even by experts cannot prove that the building is overpriced,” he said.

Binay is traveling around the country to feel the public pulse on his long-declared plan to run for president.

On Monday he went to Bulacan province where he declared: “There’s no turning back. We will run for the presidency in 2016.”

As in his previous trips, Binay joined market vendors and residents in a boodle fight in Hagonoy town.

Binay said he liked to visit public markets because such places gave him the opportunity to talk to “real people.”

He dismissed observations that he was campaigning well ahead of the 2016 elections. It’s up to the people or the press to interpret his trips, as he brings public service directly to the people, he said.

Binay, chair of the Housing and Urban Development Coordinating Council (HUDCC) and presidential adviser on overseas Filipino workers’ concerns, said part of his visit to Bulacan was to meet with Malolos Mayor Christian Natividad on the housing needs of residents and the problems of migrant workers in the city.

He said he visited Bulacan on his own, without any local official inviting him.

Binay made no effort to conceal his disappointment with the press coverage of his investigation by the Senate.

Seeing an Inquirer correspondent in Hagonoy, Binay said, “Your reporting about me and Sen. (Antonio) Trillanes has put me in a bad light.”

He repeated his complaint in Malolos, addressing himself to the networks GMA-7 and ABS-CBN: “You interviewed me several times, and I even called a news conference. I answered all of your questions but still you keep hitting me.”

But his interaction with the people when he goes around the country has shown he still enjoys their trust, he said.

“The people have become discerning, and they know if they are being fed lies. This kind of response and reception, like what I received in Bulacan, only shows that the people do not believe the accusations of corruption thrown at me,” Binay said.–With a report from Carmela Reyes-Estrope, Inquirer Central Luzon