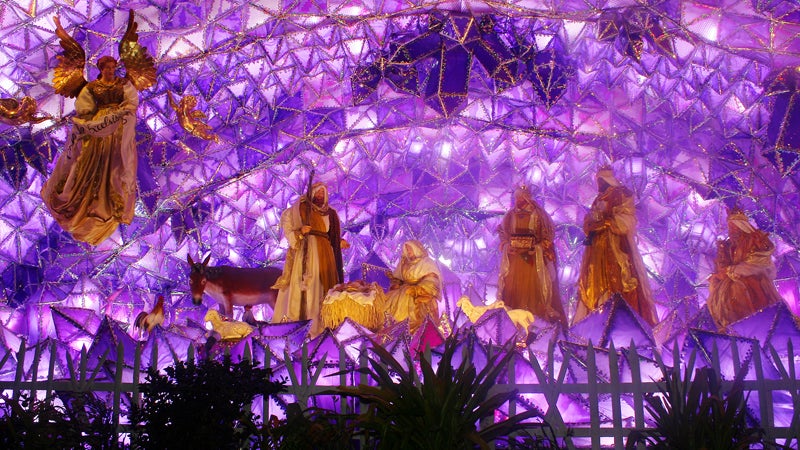 BIRTH OF CHRIST RECALLED Built by soldiers, a Nativity scene is displayed at the military’s Northern Luzon Command at Camp Aquino in Tarlac province. The backdrop is made of plastic materials. WILLIE LOMIBAO/ CONTRIBUTOR

MONCADA, Tarlac—At dusk on Saturday, an elderly woman, aided by an assistant, stepped off a van and took a close look at a “belen” (Nativity scene) built at the town plaza.

She was so awed to see the light-bathed display that, despite her walking difficulty, she and her group moved up a bamboo walkway and inched closer to the manger to pose with the figures of the Holy Family at the center of the belen.

“Isn’t this beautiful? It’s terrific. Look at the way it is decorated with lights,” said the woman, Socorro Ramos, 92, owner of National Book Store, the country’s largest chain of bookstores.

“I think this is the most beautifully decorated Nativity scene in the whole Philippines,” Ramos said.

This town’s belen is just one of the more than 60 Nativity scenes displayed this year in the different towns of Tarlac province, 100 kilometers north of Metro Manila.

Ramos, who traveled from Manila, was one of the hundreds of tourists visiting the province’s different Nativity displays at this time of the year.

Many of the belen are displayed in town halls, churches and establishments along Manila North Road (MacArthur Highway), providing travelers a visual treat, especially at night.

Amado Go, a member of Tarlac Heritage Foundation (THF), said “belenismo”—the art of making Nativity scenes that are displayed by local governments, churches and other groups—had become the most-awaited occurrence in Tarlac during the Christmas season since THF began leading the event in 2007.

At that time, THF, founded by President Aquino’s aunt Isabel Cojuangco Suntay, was looking for an event that would tap local artists and make people feel the spirit of Christmas in their communities, according to Go.

“We celebrate Christmas in the Philippines for about two months. So, we thought of the belen,” said Go, a former Tarlac provincial board member.

He said the provincial board then passed a resolution he authored to institutionalize belenismo in the province.

After three consecutive years of successfully holding the event, Go said the Department of Tourism declared Tarlac the belen capital of the Philippines.

“Since then, we have been known for that. We are very happy and proud of it,” Go said.

Dr. Maribel Dizon, chair of Tarlac City Tourism Council, said that more than winning this year’s belen competition, the participants wanted to show the world how united and God-loving the city’s residents are.

“Our belen signifies unity, and the prominent colors are gold, silver and bronze, which signify royalty and our belief in our Creator, the Savior of the earth,” Dizon said.

Wilfredo Toldanes, city tourism officer, said the city had been joining the belen-making competition yearly but this was the first time he was satisfied with the city’s entry.

“Maybe, it’s because this time, we worked hard on it. As you can see, people appreciate it,” Toldanes said.

The display, which is about 11.5 meters high, has a star mounted on top of a steel frame shaped like light rays.

“When we see that star above, our people don’t lose hope and we can feel the presence of the Lord,” Dizon said.

“It’s unique because you can see Baby Jesus without a face. So every time you come and pray, what do you see of yourself? Are you a person deserving to see this belen?” she said.

But as Tarlac City chose to craft a unique belen, the Catholic Church in Paniqui town preferred to display a belen inspired by the Disney animated film “Frozen,” building a miniature castle as the backdrop of the Child Jesus’ manger.

Alex Lamorena, vice president of Sta. Rosa de Lima Parish Pastoral Council in Paniqui, said the parish entry was a modern version of the belen and was specially dedicated to children, for whom Christmas is celebrated.

Every night, according to Lamorena, the members of the parish youth ministry gather in front of the display to sing Christmas carols, including a Filipino translation of the movie theme song, “Let It Go.”

Go said that aside from attracting tourists to the belen displays, the annual activity has served as a launching pad for local artists and designers.

He said a winner in the personal category event during a previous competition, Albert Dancel of San Jose town, had been hired by a shopping mall and eventually by a company abroad.

“He was unemployed. But because his talent was discovered, he now has a stable and a high-paying job,” Go said.

He said belenismo would continue in the coming years because it was a legacy they could pass on to Tarlac’s next generation.

“We should not stop this just because of politics or economic difficulties,” Go said. “We should continue doing this in celebration of the Nativity so that the next generation will have something they can be proud of.”

The ‘Belen’ is here to stay

What is the giving all about?