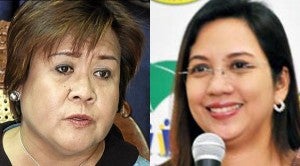 MANILA, Philippines – Whistleblowers who wanted to pin Acting Health Secretary Janette Garin on her alleged involvement in the anomalous use of millions of pesos in funds of the defunct National Agri-Business Corp. should submit more documents if they wanted the investigation to continue.

Confirming that the P5-billion Nabcor fund scam probe has been stalled at the National Bureau of Investigation, Justice Secretary Leila de Lima on Friday cited the need to gather more documentary evidence to boost the case against those suspected to be involved.

“If the witnesses have the documents being required of them, then the probe could proceed anytime,” she told reporters.

Garin was implicated last March by former Nabcor officials Rhodora Mendoza and Victor Cacal as among the lawmakers who allegedly benefited from the Nabcor funds intended to be used for “technical studies” for rice harvest improvement but ended up in the politicians’ campaign kitties instead.

Garin, who was named health undersecretary in 2013, has repeatedly stated that she was not involved in the scam and had no contact with Nabcor or anybody from the state-owned firm.

De Lima also confirmed that the NBI’s special task force has continued to be in charge of the fact-finding on the Nabcor scam but investigation has been delayed. She added that the NBI would resume its probe if the necessary documents were given by the whistleblowers.

“There were many documents asked from them (Mendoza and Cacal) that they failed to present,” the Secretary said.

The task force was the same team that investigated the P10-billion Priority Development Fund Assistance scam involving businesswoman Janet Lim-Napoles and other former and incumbent lawmakers and government executives.

De Lima said the NBI was initially uncertain about continuing with the probe after learning that the whistleblowers and their lawyer Levito Baligod had also submitted their affidavits to the Office of the Ombudsman.

“They first went to the Ombudsman before Attorney Baligod brought them to us. They showed certain documents, but I wasn’t sure if they officially subscribed to their sworn statements,” the Secretary recounted.

The whistleblowers claimed Garin and nine other politicians got up to P300 million from Nabcor funds sourced from the Ginintuang Masaganang Ani program of the Department of Agriculture.

Mendoza, Nabcor’s former vice president for administration and finance, alleged that she was ordered by then Nabcor president Alan Javellana to transfer the funds for the personal expenses of some politicians in the 2007 midterm elections.

At that time, Garin was an Iloilo congresswoman allied with then president and now Pampanga Rep. Gloria Macapagal-Arroyo.

Garin’s legislative district also cropped up as among the areas that benefited from the “fertilizer fund scam,” which involved the diversion of about P728 million to Mrs. Arroyo’s campaign fund during the 2004 election period.