Peacekeeper’s wife’s complain: Why can’t I talk to my husband?

The wife of one of the 133 Filipino peacekeepers who were quarantined on Caballo Island upon their arrival from Ebola-stricken Liberia on Wednesday has decried the government’s limiting communication between the soldiers and their families.

Speaking to the Inquirer in a phone interview yesterday, “Therese” (not her real name) said that while she understood that the 21-day quarantine was necessary to ensure that the Philippines remained Ebola-free, she didn’t understand why the communication between the peacekeepers and their families had to be minimized.

The Inquirer is changing the interviewee’s name at the request of the Department of Health and the Philippine Air Force (PAF), which do not want the identities of the relatives of the peacekeepers to be disclosed so they will not be stigmatized in their communities. 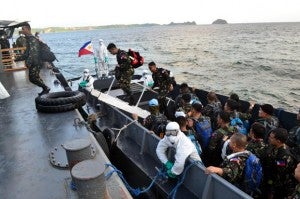 “They said everything would be OK. There would be ways to communicate, but I can’t even talk to my husband [properly and regularly],” Therese said.

She said the only time she talked to her husband since his transfer to the island was Friday noon, when he called her using the “common cell phone” there.

And this was only after she had insisted to the PAF over the phone in the morning that she be allowed to talk to her husband, she said.

“Before that, nobody would answer his cell phones every time I called. When he arrived there, he did not contact me. No one from the government even informed us about how our loved ones were doing,” she said.

When she and her husband finally got to talk, their phone conversation did not last even five minutes, she said.

“He said he was OK. And I said we were also OK. And then the line just went dead,” she said, adding she tried calling the number of the common cell phone but it could no longer be reached.

She said before the peacekeepers were kept away from their families, the government should have thought of ways for them to at least communicate with their loved ones, who “worry about them all the time.”

Instead, she said, it is the families who have to think of ways to get in touch with the soldiers, but to no avail.

“At one point when I was complaining, the person I called at the PAF told me to buy a SIM card, take it to Villamor Air Base before 6 a.m. so that I could contact my husband,” she said, adding that supplies are taken to the island at that time every day.

“Really? Shouldn’t they have thought of that? I can’t do that, it’s too far. I am in Pangasinan,” she said.

“It was better when he was in Liberia, because we could talk for hours every day. Now I don’t even know what’s happening to him, and that makes me really worried. I can’t sleep properly,” she said.