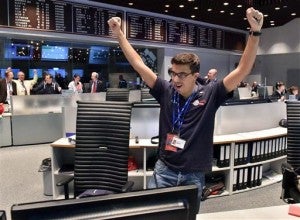 BERLIN, Germany—Scientists say the Philae lander, which has fallen asleep on comet 67P/Churyumov-Gerasimenko with its batteries depleted and not enough sunlight available, may communicate again Saturday at about 10:00GMT (5 a.m. EST).

Scientists at the European Space Agency said on their blog early Saturday that “from now on no contact would be possible unless sufficient sunlight falls on the solar panels to generate enough power to wake it up.”

On Friday the scientists performed a rotation hoping to put the lander’s solar panels out of the shadow, but they said they would not know until Saturday if they had succeeded and the lander would be able to catch enough sunlight to recharge its batteries.

Philae landed on the comet Thursday after a 10-year journey aboard the Rosetta space probe.