MANILA, Philippines—The high school building was above average compared to other public schools, but did we pay the right price?

That was the question raised by Senator Antonio Trillanes IV after an ocular inspection of the allegedly overpriced Makati Science High School on Saturday.

Speaking to reporters, Trillanes said documents from the Makati city government revealed that each classroom costs P24.6 million to construct. He said the cost should have been much less.

Pimentel said the building itself looks good compared to other government buildings he has been to.

“I am satisfied with what I have seen. It looks strong and safe for students,” he said. 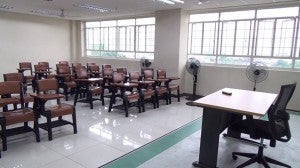 But for Trillanes, the question remains if the construction of the building was paid at the right price.

He said the price of each room was not justified, citing   that even the luxury hotels won’t cost that much to build a room.

The two, senators, however, said a physical inspection of the building would not fully determine if it is overpriced or not.

This was the reason why the senators invited Federico Cuervo, a property appraiser from Cuervo Valuers & Advisory including Ramon Zoleta, the engineer of the P1.3 billion high school building.

Cuervo would give his observation and comment at the Senate blue ribbon committee hearing on Tuesday.

Inside the pricey school

During the ocular inspection, Trillanes and Pimentel observed that construction on the 8th to 10th floors of the building have yet to be finished.

Evangelina Apolinario, school principal, said that although the building was still unfinished, it was turned over to them in February 2014 and has been in use since June.

Pimentel said he would clarify with the Commission on Audit about the turnover of an unfinished building.

Pimentel observed that most of the classrooms, which are on the fourth to seventh floor, are not air-conditioned.

Stand fans and ceiling fans are the only source of ventilation for the classrooms including in its dormitories.

The school building has 20 dormitory rooms with a total of 234 beds. The dormitories, however, were not yet ready for occupancy.

The Makati Science High School is currently one of the subject of investigation of the Senate blue ribbon committee for allegedly being overpriced. It was constructed during the stint of Vice President Binay as city mayor of Makati.

Binay is also accused of receiving kickbacks from another purportedly overpriced     structure, the Makati City Hall Building II. He is also accused of owning a sprawling property in Rosario, Batangas, known as the “Hacienda Binay.”

The vice president has denied all the allegations hurled against him and has repeatedly snubbed Senate invitation to attend its high profile investigation.