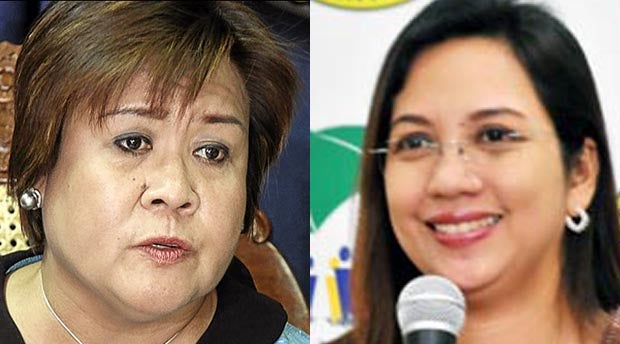 Instead of going to the media to defend themselves, Department of Health officials should just submit themselves to an investigation, Justice Secretary Leila de Lima said on Friday.

De Lima referred in particular to Acting Health Secretary Janette Garin who gave a media briefing last Wednesday to clarify certain issues with regard to the department’s questionable P833.67-million procurement of antipneumonia vaccines allegedly against the recommendation of the World Health Organization (WHO) and other global health experts.

In the same press conference, Garin also sought to clarify her alleged involvement in the diversion of P5 billion in congressional pork barrel funds through the defunct National Agribusiness Corp. (Nabcor).

Garin was named in press reports as one of the former lawmakers being investigated by the NBI in connection with the allegedly irregular use of the P5-billion funds through the Nabcor.

“Allow me to categorically state that I did not have funds with Nabcor when I was still in Congress,” Garin said.

Describing the accusations as malicious, Garin said that when the issue came up in the media earlier this year, she presented herself to the DOJ and the NBI and was told that she would be summoned when the investigators found any basis in the complaint against her.

“I advise DOH officials, including OIC Garin, to refrain from making public clarification/ justification of such issue, pending the probe. Those justifications should instead be submitted to the Office of the President and the DOJ-NBI,” De Lima said in a text message.

Garin, a former Iloilo congressional representative, assumed the DOH top post in an acting capacity after Health Secretary Enrique Ona went on a monthlong leave, reportedly to prepare his report to President Benigno Aquino III on the controversial 2012 procurement of pneumococcal conjugate vaccine 10 (PCV 10) for the government’s expanded vaccination program.

The purchase has been the subject of a complaint by three agencies in the Office of the President on the grounds that it failed to comply with the WHO recommendation to procure a more cost-effective version of the antipneumonia shot, the PCV 13.

The NBI discreetly initiated an investigation into the procurement in June on orders of the President. The DOH is also undertaking its own investigation and expects to finish the inquiry before the end of Ona’s monthlong leave.

Ona and Assistant Health Secretary Eric Tayag are among the health officials being investigated. Tayag allegedly ordered the procurement of the PCV-10 instead of the PCV-13.

In last Wednesday’s press conference, Garin clarified that Tayag’s return to his previous designation as Director IV in the wake of the controversy “is not a demotion as his actual position is really Director IV.”

She said the change in Tayag’s designation was part of the “streamlining” of the DOH’s organizational structure in response to the clamor from several officials to fix the department’s organization.

Garin linked the surfacing of the old allegations to her appointment as acting head of the DOH.

“The past few days, there were insinuations that my designation as acting secretary is all about politics,” Garin said as she called on Ona and Health Undersecretary Teodoro Herbosa to refute this, as “they know the truth, that there is no politics involved in the current situation.”

“I admit I was a politician. But that does not prevent me from serving our country. I am not perfect but I have accomplished something as a lawmaker,” said Garin, one of the authors of the controversial reproductive health (RH) law.

She said she has no plans of holding on to her position should the investigation prove that Ona did nothing wrong.

And should Malacañang appoint her as health secretary but the DOJ were to find that the allegations against her had basis, she would immediately step down, Garin said.