“If that’s the statement of the President, we respect that,” Binay said when sought for his reaction to the President’s remarks.

Aquino, at the Asia Pacific Economic Cooperation conference, said he hoped all evidence against Binay would be presented immediately so that those liable could be charged and “we can all focus and go back to our other work.” 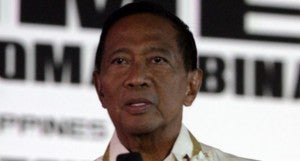 The Palace later clarified that this did not mean that Aquino intended to meddle into the Senate inquiry, which Senator Aquilino Pimentel III has warned against.

Binay, when asked by reporters if he appreciated the President’s words, replied: “certainly.”

Binay on Thursday visited several Cavite towns for the inauguration of the Office of Senior Citizens’ Affairs facilities and the distribution of medical equipment and wheelchairs.

He was accompanied by Cavite Gov. Juanito Victor “Jonvic” Remulla, who is also the vice president’s spokesperson, and Cavite Vice Gov. Jolo Revilla.

In a separate interview, Remulla said Aquino’s remarks were a mere “suggestion and a message of unity.”

“I think that the President also feels that all this time the Senate spends (in the investigation) should be spent instead for the country’s welfare and not to bring down some people,” Remulla said.

He said the Senate spent P50 million for each day in the conduct of the hearing, an amount that could be used instead to rebuild the houses destroyed by supertyphoon Yolanda in the Visayas.

He said Binay was “thankful to the president for still believing in (Binay’s) service and performance.”

Amid the controversies, Binay seemed to be in a good mood Thursday as he told jokes when he addressed the senior citizens in Alfonso and General Emilio Aguinaldo towns.

He even took extra effort to walk to the house of Ceferina Monteverde in Alfonso to personally meet and greet the 108-year-old woman said to be the oldest in the town.

In every town, Binay was introduced as the “next president.” He proceeded to the towns of Maragondon and General Trias in the afternoon for a similar program.

But the Vice President remained evasive to political questions and referred the media instead to Remulla.

In reaction to the claims of Senator Antonio Trillanes IV about the Vice President’s supposed participation in the 2007 coup d’ etat plot, Remulla said Binay was indeed “invited but declined when (Binay) realized that nothing good would come out of it.”

Trillanes, one of the senators at the forefront of the investigation, said Binay’s backing out of their debate was no surprise to him since Binay also withdrew his support to the Magdalo soldiers in the so-called Manila Peninsula siege.

Remulla said Binay had no participation at all in the attempt to launch a coup d’ etat.

“We just learned that Senator Trillanes would come out with photos of the Magdalo troops at the Vice President’s piggery,” Remulla said, although he did not specify the piggery’s location.

Remulla went on to say that those soldiers were the mutineers, who after losing their jobs, sought Binay’s help. The failed mutineers were then hired as caretakers at Binay’s piggery, Remulla said.

“This (as would be shown on the pictures) happened after the fact. Not before (the Manila) Peninsula siege,” he said.

But to everyone’s surprise, the Vice President decided to take his lunch with members of the Kapisanan ng Brodkaster ng Pilipinas (KPB), who were having a three-day conference at the Taal Vista hotel, here. Binay arrived at the conference as Sen. Grace Poe, who was the conference’s keynote speaker, was towards the end of her speech.

KBP organizers also seemed surprised when the Vice President was introduced on stage.

“I hope I will not be treated as a gatecrasher because I was not part of the (KBP’s) program,” Binay later told the Inquirer.

Remulla said it was also a coincidence that Poe, who has been eyed by political parties as a plausible vice presidential candidate, was there.

Binay explained why he backed out of his scheduled debate with Trillanes on the corruption allegations that the senator has raised against the vice president.

“This is a formal apology to the members of the KBP. I know that you had prepared for this, you had informed your members there would be such a thing (debate),” he said.

Binay said his decision was prompted by a media interview on November 9 wherein he was asked by a reporter to comment on Trillanes “preparing and even getting a tutor” for their debate.

“If that’s the case, I’d rather that it not push through. I always had that feeling that, you know, magkakabaliktaran, pag dating nang huli (the opposite will come out in the end),” said Binay, a litigation lawyer before he entered politics.

He called Trillanes an “opportunist.”

“Alam naman nyang kawawa ako sa kanya, e pinag-gigiitan na kami ay magharap. So para wala nang ganung conclusion pa, wala na, ayoko na,” he said. (He knew I will end up the loser here. Everyone was insisting that we should come face to face. To avoid that conclusion, I decided against the [debate].)

To the members of the media, “don’t worry, even if sometimes it’s hurting, you’re just doing your jobs,” Binay said.

“It’s the Vice President asking for it (apology), who are we not to (accept)?” he said.

Aquino told: Back off Binay probe