Aquino told: Back off Binay probe 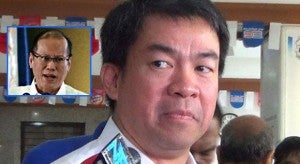 Sen. Aquilino Pimentel III (shown in photo) said Wednesday President Aquino (inset) should keep his hands off the Senate’s investigation of irregularities allegedly committed by Vice President Jejomar Binay while he was mayor of Makati City, or face criticism for interfering in the affairs of a coequal branch of government. INQUIRER FILE PHOTO

President Aquino should keep his hands off the Senate’s investigation of irregularities allegedly committed by Vice President Jejomar Binay while he was mayor of Makati City, or face criticism for interfering in the affairs of a coequal branch of government, Sen. Aquilino Pimentel III said on Wednesday.

Pimentel, chair of the Senate blue ribbon subcommittee conducting the inquiry, made the statement following Aquino’s observation that the investigation had gone on too long and was proceeding in “dribs and drabs.”

The inquiry has been hampered by “unfriendly fire,” Pimentel said, referring to the refusal of resource persons to appear in his hearings.

“That would be a dangerous precedent and could be misconstrued as interference with a coequal branch of government,” he added.

The President told reporters while on a visit in Beijing on Tuesday that he hoped all evidence against Binay would be presented so that those liable would be charged, and those cleared would be absolved, and “we can all focus and go back to our other work.”

Reacting to the President’s remarks, Binay’s spokesman Joey Salgado said, “The senators leading the inquisition against Vice President Binay should see the President’s statement as a gentle reminder that the rights of individuals should always be respected and the courts are the proper venues to determine the guilt or innocence of an individual.”

Senate President Franklin Drilon on Wednesday said the decision on whether enough evidence had been collected in an investigation rests with the subcommittee chair and his members—Senators Antonio Trillanes IV and Alan Peter Cayetano.

“Each senator has the right to investigate any issue pending in a committee. The committee has said that there are other buildings that it plans to look into,” Drilon said in a radio interview, suggesting an expanded inquiry.

Trillanes said too many anomalies had taken place in Makati under Binay’s watch, requiring hearings to continue up to April or May next year.

Trillanes said he did not think the President was trying to stop the Senate probe. He added that Aquino might not have been informed that there was already a pending case against Binay in the Office of the Ombudsman, and the Department of Justice (DOJ) was also investigating other related issues.

Both Trillanes and Pimentel also said that if there was anybody whom the President could ask to speed up its investigation or give a deadline to, it would be the DOJ, an agency under the executive branch.

Aquino could also advise Makati City to cooperate with the Senate probe, Pimentel said, pointing out it was under the supervision of the Department of the Interior and Local Government.

But Aquino should not tell the senators how a legislative investigation should take place, he said.

Trillanes filed the resolution calling for the inquiry into the alleged overprice of the Makati City Hall Building II, and of other related anomalies purportedly committed by past and present city officials.

Earlier, Makati Mayor Jejomar Erwin Binay and other Makati officials filed a jurisdictional challenge and sought a stop to the subcommittee hearings, saying the panel had overstepped its authority.

Pimentel said the Binay camp was in no position to characterize the investigation as not in aid of legislation.

Trillanes, speaking over dzBB, also said on Wednesday that the subcommittee’s investigation of Makati issues was different from the one conducted by the Ombudsman and the DOJ.

The Senate inquiry was intended to help craft laws for better governance, he said. The probe also has a public information component, he added. In the public hearing, he said the people were able to see how irregularities were committed.

Also on Wednesday, Malacañang said there was nothing wrong in the President relaying to Senate President Franklin Drilon Binay’s request that the upper chamber stop its investigation.

“We do not see anything improper about the President conveying a message,” Abigail Valte, Malacañang’s deputy spokesperson, told reporters. “To his mind, there is nothing wrong about conveying the message.”–With reports from Tarra Quismundo and Christian V. Esguerra