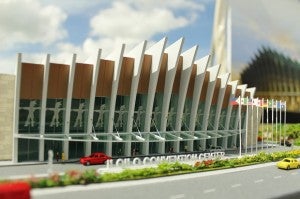 “It pains me to tell the whole nation that Iloilo City has become the bird’s nest of corruption in the country and it’s largely because those behind such corruption enjoy a mantle of protection from the third highest elected official of the land,” Mejorada said when he faced the Senate blue ribbon committee hearing on the alleged overpricing of the Iloilo Convention Center (ICC).

(Corruption has widened and worsened because they are leaning against the walls of the Senate.)

Mejorada filed a plunder complaint at the Office of the Ombudsman against Drilon and other officials over the ICC project.

Hundreds of millions of pesos, he said, were allegedly lost to corruption in various projects in the province like the Pavia Housing Project, Iloilo City Hall, Iloilo Diversion Road, Esplanade I and II, the San Isidro relocation site, the two fly-overs under the President’s Bridges Program, the Hall of Justice, among others.

On the issue of the ICC project, Mejorada alleged: “There was collusion by and among the principal players in the Department of Tourism and Department of Public Works and Highways (DPWH) to carry out the irregular transaction and award the contract to Hilmarc’s Construction Corp.”

The procurement law, Mejorada said, has also been “prostituted to disguise corrupt practices in the procurement and implementation of infrastructure projects,” citing the following:

* The procurement of the consultancy services of W.V Coscolleula and Associates did not undergo competitive bidding.

* In the conduct of the first and second biddings for the contract, the DPWH Central Office Bid and Awards Committee or BAC violated provisions of the implementing rules and regulations (IRR) for RA 9184 which resulted in the negotiated mode of procurement.

* The introduction of “value engineering” in the negotiated mode of procurement was a “misapplication of the concerted, which was also a violation of the RA9184 and its IRR.

* The implementing agency also jeopardized public safety in allowing a design for the project without input from geo-technical soil investigation.”

* The contract price of P492 million for Phase 1 of the two-story ICC was grossly overpriced.

* The construction of the project commenced without the building owner, the DOT first obtaining an environmental compliance certificate from the Environment Management Bureau.

* And the project construction commenced without a building permit in violation of the National Building Code.