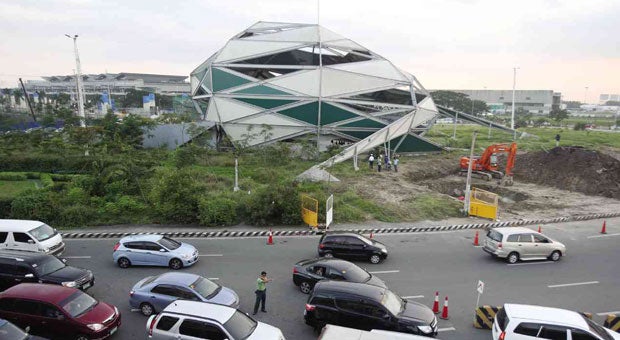 The government spent millions of pesos to have it erected four years ago, but now the head of the Manila International Airport Authority (MIAA) is very much in favor of its removal to make room for a major infrastructure project that would ease traffic in Pasay City, especially on roads leading to the Naia terminals.

“I don’t mind having that structure demolished,” MIAA general manager Jose Angel Honrado said in a press briefing on Wednesday. “I was told by the contractor of the Naia Expressway that that egg structure will be demolished. I told them: ‘Go on, I don’t mind.’ You remove that and we can ease the traffic.”

The official was referring to the piece officially titled “Layag Islas (Islands in Flight)” on the rotunda named Circulo del Mundo.

According to a statement issued in December 2010 by the Philippine Information Agency, the piece was based on the “award-winning concept” that topped a design competition held in 2008 by the MIAA and the Metropolitan Manila Development Authority (MMDA), then chaired by Bayani Fernando.

Its construction started in September 2009, under the administration of President Gloria Macapagal-Arroyo, and was finished in December 2010, under the Aquino administration. MMDA chair Francis Tolentino then remarked: “I hope the public will appreciate the beauty of this structure as it is proof of the Filipino’s artistic excellence.”

But years later, Layag appears to have gained more critics than fans. Of late, netizens have been ranting about “that egg,” calling it a waste of government funds.

In earlier interviews, Fernando denied reports on the social media that the government had spent P390 million for the project, saying the cost was P50 million.

Honrado’s remarks on Wednesday were in reaction to plans announced by the Department of Public Works and Highways (DPWH) that Layag would be removed to make way for Phase 2 of the Naia Expressway, a four-lane elevated highway that will connect Naia Terminal 1, 2 and 3 to the Skyway and the Manila-Cavite Toll Expressway.

Phase 2 of the project is expected to be completed in October 2015, in time for the country’s hosting of the Asia-Pacific Economic Cooperation (Apec) Summit.

But according to Ramonito Jimenez, the project engineer, Layag only needs to be moved “slightly” from its current location for the planned highway to pass through. “We have instructed the concessionaire of the project, Vertex Tollways, to do the dismantling soon,” he said.

Initially, the plans didn’t require the removal of the structure but Vertex and the DPWH decided to change the alignment to speed up construction, Jimenez added.