Two senators are seeking an inquiry into the demolition of heritage sites in Manila, including those in the preserved Spanish-era enclave of Intramuros, that the local government and national cultural agencies had allowed to give way to modern developments.

Citing the lack of public appreciation for  historic sites, Sen. Loren Legarda noted how these structures had been endangered. She cited the demolition of the old Army and Navy Club, the Admiral Hotel, and Michel Apartments.

The rich and colorful history of the country is reflected in the architectural landscape of Manila which was intended as a planned capital cityakin to Washington DC, designed by noted architect Daniel Burnham (of Baguio City fame) and created with wide, tree-lined boulevards dominated by the Luneta Park and government buildings in neoclassical style, Legarda said in a resolution. 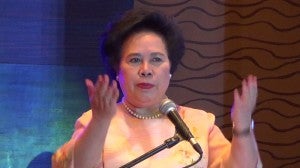 The Army and Navy Club, an American-era building on Roxas Boulevard, is now partially demolished as a private developer plans to turn the site into a boutique hotel. The demolition was recently ordered stopped by the National Historical Commission of the Philippines because the developer supposedly  had permits to tear down only the adjacent structures.

Built in 1911 to host the first American social club in the country, the building was declared a national historical landmark in 1991. Despite this status, it fell into neglect until authorities started considering its restoration in 2007.

In a related move, Sen. Miriam Defensor-Santiago also filed a resolution calling for an inquiry into the reported plan by the Department of Public Works and Highways to demolish structures in Intramuros, including the Anda Circle Monument, to speed up the flow of cargo trucks from the port area.

Santiago said heritage sites must not be sacrificed just because the booming population and increased business activity had aggravated traffic conditions.

Congress must ensure, by intensifying legislation, that the physical manifestations of the Filipinos national heritage are preserved and protected, she said.

In September, during a Senate hearing on Torre de Manila, a rising condo project which critics said would mar the view Dr. Jose Rizals monument, former Tourism Secretary Gemma Cruz-Araneta called attention to other heritage sites in danger of being torn down or sold.

Araneta then cited the old buildings on Escolta Street, the El Hogar Building, the Manila Post Office, and the Manila Metropolitan Theater, among others.

The Torre controversy was tackled by the Senate committee on education, arts and culture, which is chaired by Sen. Pia Cayetano.

Legarda and Santiago proposed that the same committee conduct the inquiry into the endangered heritage sites cited in their resolutions.