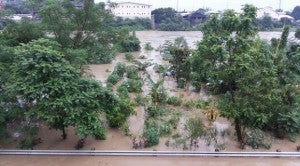 MANILA, Philippines—The naked body of a 9-year-old boy was discovered by residents at the bank of Marikina River in Marikina City on Wednesday afternoon.

Senior Superintendent Vincent Calanoga, Marikina City Police chief, said the boy was found at around 3 p.m. on the Barangay (village) Jesus dela Peña side of the river.

“The body was not decomposing. His wounds are still fresh,” ‎Calanoga said in a phone interview.

‎In a radio report, the residents said the boy was last seen Tuesday afternoon around 2 p.m. crying ‎near the riverside.

Quoting the parents, the report said they were waiting for their son to come home at 5 p.m. but he never returned.

Calanoga said police investigators ‎and scene of the crimes operatives are in the area for further investigation.