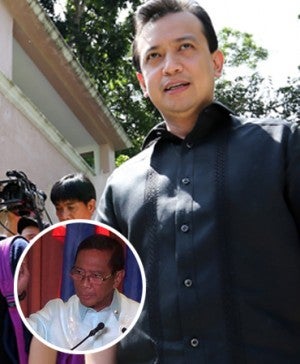 MANILA, Philippines–Vice President Jejomar Binay backed out of his own proposed debate with Sen. Antonio Trillanes IV because he is afraid of the truth, which is hard to destroy even with the most skilled of arguments, according to the senator who was supposed to have faced off with Binay on Nov. 27.

But Trillanes, a former Navy officer, also said it wasn’t the first time Binay was untrue to his word.

The Vice President backed out of the debate because he was afraid the public would learn that when he was Makati mayor he conspired with Magdalo renegade soldiers to launch an attempt to unseat then President Gloria Macapagal-Arroyo in 2007.

Trillanes, who led the 2003 Oakwood mutiny in Makati against the Arroyo administration for which he was detained for several years, made the assertion on Tuesday after Binay withdrew from their debate.

Trillanes said Binay had failed to deliver on his promise to gather a crowd of supporters for the soldiers who walked out of a court hearing to seek the overthrow of the Arroyo administration, leaving the group in the lurch. The soldiers were later forced to surrender.

“Senator Trillanes is now attempting to rewrite history with a revisionist version of his Manila Peninsula siege which ended in a fiasco,” Joey Salgado, one of the spokespersons for Binay, said in a statement.

Tension between Binay and Trillanes heated up recently after the latter initiated the Senate inquiry into alleged corruption in Makati where the Vice President, its former mayor, has been implicated.

Binay subsequently challenged Trillanes to a debate but on Tuesday he backed out of the match.

“In this particular case, whatever he might say, he is just afraid of the truth. That’s the only thing I have in this debate and it’s hard to destroy that. No matter how skilled you are in arguing, if your opponent is holding the truth, you won’t win,” Trillanes told reporters.

He said he was not surprised when Binay backed out, recalling Binay’s role in the 2007 revolt, known as the “Manila Peninsula siege,” because the soldiers had holed up at the hotel before surrendering.

At that time, the Magdalo soldiers were detained for the 2003 Oakwood mutiny in Makati against the Arroyo administration and were being tried for staging a coup d’etat at the Makati City Regional Trial Court.

Trillanes recounted that his group had reached out to Binay because the latter was then with the opposition. Their meeting to stage the revolt against the Arroyo administration took place in the office of the judge handling the soldiers’ trial. The court is in the same building as the Makati City Hall.

Binay then promised that he would use his position to mobilize the employees of Makati City Hall, the urban poor, the students of the University of Makati, even the Makati traffic enforcers and police, according to Trillanes.

“On the eve of the Manila Pen incident, we were able to bring in our guns to Makati City Hall so we could use these for our revolt. Up to that point it was clear he was with us,” he said.

But when the day of the siege came, when the Magdalo soldiers had walked out of their trial, Binay and his promised group of supporters were nowhere to be seen.

“He put the whole group in trouble,” he said. “Not even the shadow of Vice President Binay was seen in Makati that day.”

The Magdalo group was also in touch then with Binay’s son, then Makati Councilor Jejomar Erwin Binay, who told the Magdalo soldiers that supporters were already being mobilized. But nobody showed up.

The group was supposed to converge at Ayala Triangle where they intended to gather a critical mass, but without the promised supporters, the soldiers went to the Manila Peninsula Hotel and holed up there. They later surrendered.

It was the absence of mass support that forced Binay to abandon the renegade soldiers, according to former Makati Vice Mayor Ernesto Mercado, an erstwhile trusted aide of Binay.

“Binay was fuming about the nonappearance of people power promised by the opposition to support the Trillanes group,” Mercado told the Inquirer.

Mercado, the vice mayor of Binay at that time, confirmed the senator’s statement that Binay had talked to Trillanes about the coup and promised support.

“I know he initiated the plan and pitched this to Trillanes who agreed on Binay’s promise of people power support,” said Mercado, now a whistle-blower against the alleged corrupt practices and ill-gotten wealth of the Binay family.

The former vice mayor said that Binay had summoned him and the Makati City barangay (village) league president, Rodolfo Sese, the day before the coup and instructed them to be ready.

“Binay did not give specific details but the instruction was for us to alert our constituents and be ready to mobilize our residents at a moment’s notice for something big the following day,” Mercado said.

The instruction was to ensure that the coup plotters were protected by people power that would block government forces.

Mercado said the areas where people were supposed to be stationed were Ayala-Edsa, Ayala-Buendia, Ayala-Malugay near the fire station and the Makati-Mandaluyong bridge.

The former trusted Binay ally said that the mayor then was not in City Hall when Trillanes walked from the Makati Hall of Justice to the Manila Peninsula.

“He was in Quezon City when the coup happened, but was in constant communication with Junjun [the mayor’s son] who was a councilor at that time,” Mercado said.

When the soldiers were captured and taken to the national police headquarters in Camp Crame, Binay showed up bringing lawyers and apologizing to the soldiers, and saying he was given wrong information.

But Trillanes said he could not understand Binay’s excuse because he had already given his word, and he knew the time and place for the execution of the plan.

Trillanes added that he had castigated Binay during that time.

Salgado described the senator as someone with a messianic complex.

“History teaches us that revolutionary undertakings succeed with the support of the people, not because of one man with a messianic complex. The senator should stop blaming the Vice President for his failure as a mutineer,” Salgado said.

He said the statements of Trillanes showed that the move of Binay to withdraw from the debate was the right decision.

“The Vice President was right as there would be nothing to gain from a debate with someone who does not respect reason, facts or the rule of law and tends to exaggerate his role in history,” Salgado said.

Trillanes said he was “hoping against hope” that Binay would be true to his new role as Vice President and serve the country. But with the allegations against Binay that emerged recently, it was apparent Binay was just pretending and fooling the people.

“For the sake of the country, I hope he backs out (from the 2016 presidential race) and stop pretending and fooling the people,” he said.

Trillanes also said Binay’s decision to back out of the debate showed “lack of character, untrustworthiness… and the lack of any intention to face the people regarding the allegations brought against him.”

“I hope our countrymen see the true character of Vice President Binay. It’s important for an elected official that when he says something, he fulfills it and stands by it,” he said.

He further noted that he had acceded to all the conditions demanded by the Binay camp for the complaint, including that the Vice President be the first and last to speak at the proposed face-off.

The senator said he agreed to this even if it would give Binay a big advantage and yet the latter made excuses for the debate not to push through.

He also noted that Binay made his announcement to withdraw from the debate when he was with the Philippine Marines, who are known for never retreating. Perhaps Binay, a Marine reservist, should return his uniform, he said.

The Vice President’s daughter, Sen. Nancy Binay, said she was relieved by her father’s decision to withdraw from the debate.

“This is an answered prayer and a welcome relief for the family, although we expect that our detractors will continue to gloat over the situation,” Nancy said in a statement.

“From here, we shall move forward and the Vice President will continue to serve the Filipino people in the responsibilities entrusted to him, unencumbered by partisan attacks,” she added.–With a report from Niña P. Calleja