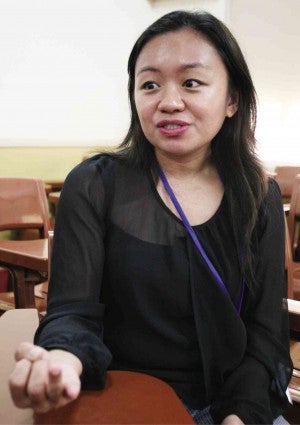 The law students were participants in the National Moot Court Competition on International Humanitarian Law (IHL) organized by the International Committee of the Red Cross (ICRC) and held at San Beda College of Law.

“The students are given a scenario and then asked to play a role … It could be any role,” Evecar Cruz-Ferrer explained the role-play’s format, which was also organized with the Philippine Red Cross (PRC) and Court of Appeals (CA). Ferrer is legal adviser and integration and promotion of the law coordinator at the ICRC.

“We’re doing the role-play challenge because we want the students to realize that IHL, the law governing war, does not exist in a vacuum,” she said.

The IHL stipulates that warring parties cannot attack civilians. Weapons that can kill both combatants and civilians, like poisonous gases or pressure-detonated land mines, are prohibited, too.

The violation of these rules in many war zones prompted the ICRC to begin the role-play challenge.

To complete the “war” scenario, judges even wore military fatigues and helmets as they listened to teams from all over the country—from Saint Louis University in Baguio City to Cor Jesu University in Digos City—defend their team’s stand on the “Crisis Military Commission” of Astro, its leader “Adm. Toni Gusman” and the planned assault, using IHL principles.

Judges Kellisiana Thynne, Fork Yeow Long and Albert Madrazo of the ICRC tested the teams in the morning as they played ICRC personnel trying to get aid to civilians in a fictional area where 200 were killed and 2,000 were injured after an air strike on a hospital.

Gusman denied medical vehicles access to ground zero on suspicion they carried weapons. He also refused to meet the ICRC and threatened to ban it from Yukule.

“It was a bit nerve-wracking because we had only 20 minutes to prepare,” said Alpha Bonifacio, a third-year law student of Far Eastern University.

“We thought Gusman was overstepping his bounds,” said teammate Justin Cebrian. “The challenge was really fun. This is our first time and it’s a good experience.” 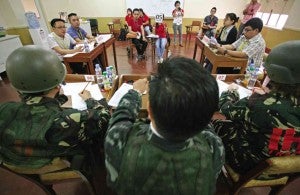 Judges in the role-play challenge are in military getup as they listen to the debates.

Adamson University’s (AdU) Jorge Patrick Yasay said, “Everything is shocking. Everyone’s just so smart … There’s pressure to think out of the box and think bigger because IHL is complex.”

The role-play challenge, introduced in 2012, is proudly Filipino, Ferrer said. “The Philippines holds the distinction [of having] the only national round that has the challenge.”

“In fact, we are trendsetters … Hong Kong has now approached us asking for the rules of the challenge,” she added. “They want to include next year the role-play challenge.”

“[The role-play challenge] was shocking because we were given a brief period to prepare, unlike the actual tournament when we [had] three months,” said second-time participant Paul Tena, also of AdU.

Teams were also required to undergo two sessions. Their average grade in the sessions determined their ranking.

“The role-play and the moot court entail different forms of analysis,” said Yasay. “The moot court requires you to think on a macro level. However, the role-playing wants you to be very specific, very operational.”

Leanne Torrato of the University of St. La Salle (USLS) in Bacolod City agreed: “It is hard because our role is to think of practical means to carry out the principles. It’s hard, especially       knowing that you can’t really apply certain principles because you are restricted by the realities of war.”

Fighting for USLS’ third moot court title after wins in 2007 and 2012, she admitted that people “are expecting so much from us.”

It was eventually edged out by the UP team of Allan Charles Nadate and Lee Yarcia in the mock International Criminal Court proceedings at the CA.

When Gusman was tried, the teams switched between prosecution and defense.

Ferrer assured the Inquirer there was no bias in judging, as the role-play challenge did not carry weight in the moot court contest.

She said the judges did not know what schools the teams represented until after the competition.

Although USLS would not represent the Philippines in the international rounds in March, Torrato said she benefited from the experience.

“As a future lawyer, I think the ability to negotiate is very helpful especially right now that the growing trend in the practice of law in the country is [to] settle rather than go to court,” she said.