(Sixth of a series) 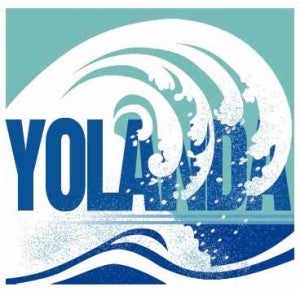 Mendoza told the Inquirer in a phone interview that his 10-day shoot in Tacloban went without a hitch.

“We filmed mainly in Barangay 88, in the tent city,” Mendoza recalled. “We went there to record the actual situation of the city.”

There was no need for “embellishments and exaggerations,” as he merely had “to depict Tacloban’s current state,” he explained.

“This film is not about politics. We want to show the present condition of the city and its people,” he said.

And the Tacloban that he saw, although still reeling from the calamity, remains willfully optimistic.

“One year after the disaster, people are trying to move on and pick up the pieces of their lives,” he said. “They try to make the most of the aid they are receiving. If there’s no assistance, then … that’s life … they try to make it on their own.”

He witnessed, and sought to document, the people’s resilience.

“The people themselves are trying to rebuild their homes. They help each other. The entire community rallied together. They draw strength from each other. We can learn a lot from the people of Tacloban,” he said.

In making the movie, the city’s residents went out of their way to make things easier for Mendoza and his team.

“Hotels and other businesses are now open, but shooting in the province is still challenging. Fortunately, a lot of people helped us. Even if they belong to different political parties, they came together for this project,” he related. 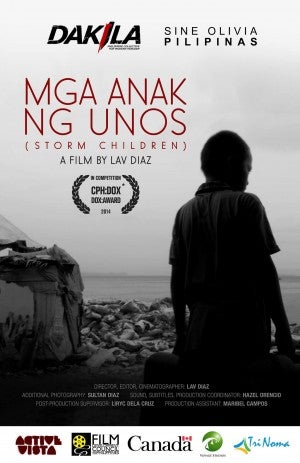 Renowned for his gritty, realistic, documentary-style of filmmaking, Mendoza nevertheless made sure not to “sensationalize” the subject.

“From the start, I told my staff to be very sensitive about the people’s situation,” he recounted. “I told them to avoid posting photos on Facebook and Twitter. We went there not to put on a show. We have to be very careful and considerate … this is a very delicate topic. It’s our duty to honor the memory of the people who perished in the storm. Ayokong mabahiran ito ng show biz. (I don’t want it to be associated with show-biz hype.)”

Still, having Aunor, known as the country’s superstar, as lead actor, Mendoza was bound to attract some attention.

Fans, brandishing banners and memorabilia, trooped to the set, to welcome Aunor.

She met elderly fans who were able to save precious long-playing albums (like “Blue Hawaii”) and newspaper and magazine clippings, their most valuable treasures, from the storm.

“Even for a short time, she made her fans forget their worries. One old fan said she never imagined she would have the chance to meet Ate Guy (Aunor’s nickname) in her life,” he said.

Aunor also met the real-life people who served as inspiration for her character, said Mendoza.

“She got to talk to actual survivors,” he recalled. “She had time to immerse herself in the community.”

He said Aunor was very serious about her work. “She remained focused throughout the shoot. From the hotel she would go straight to the set. From the set, she would go back to the hotel. In our first film together, ‘Thy Womb,’ two years ago, she really placed herself in the situation of the Badjaos. Here, she went into the world of the tent city, She relates very easily with the marginalized and the oppressed, people who are ignored by society.”

Foreign journalists, who were covering Tacloban, had sent requests for interviews, but Mendoza respectfully declined. “I didn’t want to be interviewed there in deference to the survivors. When we got back to Manila, the foreign reporters either e-mailed questionnaires or visited me at home.”

Diaz, with son Sultan, stayed in Tacloban for two weeks in May. Then he returned in August and stayed there for more than a week with actress Hazel Orencio.

Diaz described the shoot in Tacloban as “harrowing.”

“Following the kids, shooting their story, was really painful,” Diaz told the Inquirer in an e-mail. “It was heartbreaking. Most of the time you found yourself crying. Most of the time, you were overcome by the urge to save them, to help them. Those are but some of the ethical issues of making a documentary.”

He expounded on the role of the documentarian. “It’s always a struggle. Ask any filmmaker who’s doing a docu and he will say it’s hard,” he pointed out. “You often have to deal with issues of opportunism, intrusion, voyeurism.”

He said that he put himself in the role of “a journalist or chronicler” in Tacloban.

“I have to tell this story. I need to record it. That’s the role of cinema as well. Of course, I am always mindful of my responsibility to the kids. We are creating a trust fund for the kids’ education. The earnings, if ever there would be any, would go to the kids,” he said.

Diaz felt it was important to tell the children’s story. “It’s our story, too. The Filipino is a storm child. Our country is the most typhoon-battered place in the world. We are visited by an average of 20 to 28 typhoons every year. Our country holds that distinction. Storms are a part of our life.”

The website of the Copenhagen International Documentary Film Festival described Diaz as “one of the most radical and visionary filmmakers of our time … There has always been a strong impulse toward nonfiction in Diaz’s works … but in the new and almost dialogue-free documentary, [he] has gone ‘all in.’ The fact that his cinematic signature … the long and hypnotic scenes in black and white … is present in every composition … underlines the urgency of his vision and its importance in international cinema.”

The site hailed the docu as a “sublime, cinematic report from a devastating corner of a brutal reality.”

Almost a year after the storm, Diaz saw hope in the city. “There was optimism. Buhay na buhay ang Tacloban (The city was bustling with life). You could see that things were moving—economically and spiritually. But there were still issues of neglect in some sectors, of course.”