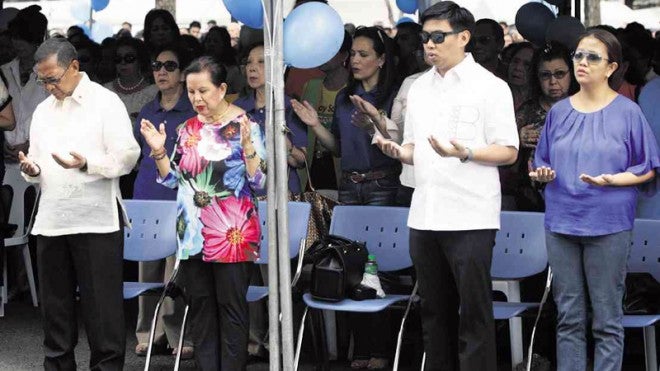 MANILA, Philippines–The Senate investigation of corruption charges against Vice President Jejomar Binay will continue despite his request that it be stopped, and the probe of the alleged overpricing of the Iloilo Convention Center (ICC) will start next week, Senate President Franklin Drilon said on Monday.

The P700-million ICC is the subject of a plunder complaint against Drilon filed by his former employee, Manuel Mejorada.

Drilon said President Aquino had called him up to relay Binay’s request to stop the Senate blue ribbon subcommittee’s investigation of alleged irregularities in Makati City. He said he turned down Binay’s request.

Drilon said nobody could dictate to the senators what to do and that not even the President could stop a Senate probe.

“I told him, ‘Sir, you were part of the Senate before. You know nobody can dictate to the senators what to do, especially when the matter of when to start and to stop an investigation is addressed to the chair and members of a committee. Not even the Senate President can tell them to stop,’” Drilon told reporters.

The chair and members of a Senate committee have the mandate of the people, he pointed out.

Binay earlier met with Aquino to ask for his help in stopping the Senate and the Department of Justice (DOJ) from investigating him. But the

President did not grant Binay’s plea.

Instead, the President told Binay to ask his daughter, Sen. Nancy Binay, why the Senate was known for being 24 independent republics. Aquino also said the DOJ would just assist the Office of the Ombudsman in its own investigation.

It began with the alleged overpricing of the Makati City Hall Building II and expanded to digging into allegations that Binay used dummies to hide his ill-gotten wealth.

On the alleged overpricing of the ICC, Drilon said he would not shy away from questions to be asked of him in connection with the Senate blue ribbon committee’s investigation. The first hearing on the ICC is scheduled for Nov. 13.

Drilon said that while he would inhibit himself from the probe, he would respond to any question that would be thrown at him. He could be a resource person at the hearing, he said.

Drilon plans to appear at the committee hearing scheduled for Thursday, but he said he would just manifest his inhibition from the inquiry and willingness to answer all questions.

This means he will not question the resource persons, he said. “Maybe I will be a resource person myself. If there are questions that they will ask, I will readily answer.”

Drilon acknowledged that the situation was awkward because he was the Senate President and would be a resource person, but that was the situation and he would not want to evade it.

Asked if he thought Mejorada was with the Binay camp, Drilon said he had no information on this.

But he noted that when Makati Mayor Jejomar Erwin Binay appeared at the Senate blue ribbon subcommittee inquiry into the alleged overpricing of the Makati City Hall Building II, he called for an investigation of the ICC.

“Is that a mere coincidence? I do not know,” he said.

As for the probe of Binay, Drilon said the President relayed Binay’s request “in a straightforward manner” and that he did not feel any pressure to grant the plea.

“Well, the President can’t also dictate to the Senate when to start or stop a hearing,” he said.

The Senate President said he did not think Aquino was asking him for a favor in conveying Binay’s request. He said the Chief Executive relayed the request in plain and simple language.

As for the President’s reaction when Drilon told him he could not stop the Makati investigation, Drilon said Aquino understood and also told him he would relay the Senate President’s decision to the Vice President. “The President knows this because he came from here.”

Drilon said the President’s call was the first time he received a request to stop a hearing.

“I’ve been the chair of so many committees; I have not received any request to stop an investigation,” he said.

Asked if he was affronted by the Vice President’s request to stop the probe, he said he was not.

“Media can ask for the hearing to be stopped. That’s perfectly within the prerogative if anyone wants to express an opinion,” he added.

Drilon also said that it is up to the committee or subcommittee to decide how many hearings it has to conduct on a particular issue.

The subcommittee has so far conducted 11 hearings on corruption in the Makati local government. Another is scheduled for Nov. 17.

It is expected to tackle alleged irregularities concerning other Makati infrastructure projects and related issues.

Sen. Antonio Trillanes IV, who initiated the investigation of alleged Makati irregularities, said he found nothing wrong in the President relaying Binay’s request to Drilon.

“It has no implication because I believe the President was just relaying to Drilon his conversation with Vice President Binay,” Trillanes told reporters.

He also said Drilon’s disclosure confirmed his earlier statement that the Vice President was looking for ways to stop the investigation against him.

The Department of Public Works and Highways would be the first to make its presentation on the ICC since it is in charge of the project, the blue ribbon committee chair, Sen. Teofisto Guingona III, said.

So far, administration Senators Sonny Angara, Koko Pimentel and Bam Aquino have signified their intention to attend the hearing, according to Guingona.

Trillanes told reporters on Monday that he would join the hearing.

Guingona, meanwhile, told reporters that if Drilon would sit as resource person, he could be asked questions anytime.

Drilon would also sit in his usual place, beside the committee chair. The seating arrangement was not an issue, he said.

Asked if he thought the committee would be able to dig deep into the issue considering a colleague was involved, he said it had been tested before in a similar instance.

“Many had doubted whether the Senate could do its job in the PDAF (Priority Development Assistance Fund) hearings and they said it could not be done and we would just cover it up. But you saw the final recommendations of the Senate blue ribbon hearings in the PDAF report,” he said.

The committee recommended the prosecution of senators who allegedly pocketed their PDAF or pork barrel funds using a network of bogus nongovernment organizations purportedly run by Janet Lim-Napoles.

Guingona said the process should be done in a transparent manner and that every participant should be treated equally.

He said it was also important that participants be given enough time to explain and be accorded dignity and respect.

Guingona added that he was more concerned with facts rather than the background of resource persons.