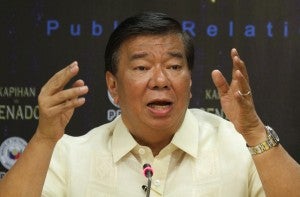 MANILA, Philippines—Senate President Franklin Drilon revealed Monday that President Benigno Aquino III has relayed to the Senate Jejomar Binay’s request to stop the investigation into the graft and corruption allegations against the Vice President.

“President Aquino called me and relayed the request of Vice President Binay to suspend the hearings. I said, ‘Sir, you were part of the Senate before, you know that nobody can dictate on the senators what to do, especially when the matter of when to start and to stop an investigation is addressed to the chair and members of a committee. Not even the Senate President can tell them to stop,’” he said.

That was how he replied to the President, he said, as he stressed that he could not force the senators to suspend the investigation “because conducting investigations is based [on] our rules—the Rules of Senate – and the decision rests in the hands of the chair and the members of the committee.”

Drilon noted that the President relayed Binay’s request in a“straightforward” manner and that Aquino said he would forward the Senate President’s reply to Binay.

The Senate President said that he could not recall when the exchange between him and Aquino took place.

Drilon said it was the first time anyone had requested the suspension of a committee investigation.

“I am talking from my own personal experience. I’ve been the chair of so many committees; I have not received any request to stop an investigation,” Drilon said.

The Senate president shied away from stating his opinion on whether the request made by Binay through Aquino was appropriate but said he did not see it as an “affront.”

“That’s a conclusion that I don’t want to get into. I’m just dishing out what the facts are.”

Drilon denied that he viewed Aquino’s action as a favor, adding that Binay’s request to stop the hearings was relayed in a “plain and simple” manner by the President.

He added that he was not pressured to yield to the vice president’s request.

Aquino earlier admitted that Binay, who is accused of graft and corruption over the allegedly overpriced Makati City Hall Building 2, asked for his advice in a meeting last October 14.

Meanwhile, the Binay camp maintained that it was Aquino who first offered help to the vice president.

The relationship between the two highest officials has somewhat cooled. Last week, in answer to a reporter’s question, Mr. Aquino said Binay was free to leave the Cabinet if he believed that the administration had strayed from its reform agenda.