MANILA, Philippines – Why is Tacloban’s rehabilitation “below par” when compared with other typhoon-hit areas? 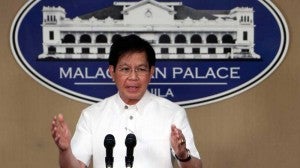 “Admittedly, its performance is below par,” Lacson said of Tacloban City during a multi-stakeholders policy forum on the rehabilitation of areas hit by supertyphoon “Yolanda” (international name: Haiyan) last year.

“This is surprising because it has been the center of national and international aid agencies,” he said.

At the press conference during the forum, Lacson said Romualdez’s action was an example of “hijacking rehabilitation efforts.”

The former Senator said Romualdez had earlier asked him to help secure the release of Tacloban’s Internal Revenue Allotment (IRA).

Lacson said he was able to do this, but Romualdez requested for the funds to be realigned because he wanted the city hall and the public market to be transferred to another site.

“If that was the intention, he could have refused the downloaded funds and instead coordinated with the Department of Public Works and Highways because DPWH is in charge of constructing totally damaged government centers,” he said.

Public Works Secretary Rogelio “Babes” Singson, who was present at the event, said his agency was tasked to implement the construction of new government structures in the typhoon-affected areas because of the need to standardize based on an “upgraded the design.”

“The DPWH will be the one to implement, not the LGU,” he said, explaining that only funds for repair are given to the local government unit.

Lacson said he was informed by Interior Secretary Manuel “Mar” Roxas II that P230.7 million was alloted to Tacloban City for the repair of the city hall and the public market and that P184.6 million or 80 percent of the said amount had been sent to the city government, upon the request of Romualdez.

“The other LGUs have already completed the repairs of the government centers. I don’t know about Tacloban. Because he’s asking the funds to be realigned, I suppose he has not yet started,” Lacson explained.

He said they will soon check what happened to the funds.

The city government received a total of P6.1 billion from government agencies for projects, programs and activities for resettlement infrastructure and livelihood of the typhoon survivors, as opposed to Romualdez’s claims to media that they received nothing from the national government, Lacson said.

He said Romualdez’s attitude was unlike those of other mayors who “despite being leaders of the political opposition, allies, but not in the inner circle, were able to undertake significant accomplishments.”

“Just two days ago, while commemorating the first anniversary of Yolanda, anti-government placards were seen stocked at the back of the city hall of Tacloban,” he added.

Asked why he was only revealing such information now, Lacson said, “We’ve been holding our punches all this time. Somehow you will reach your elastic limit.”