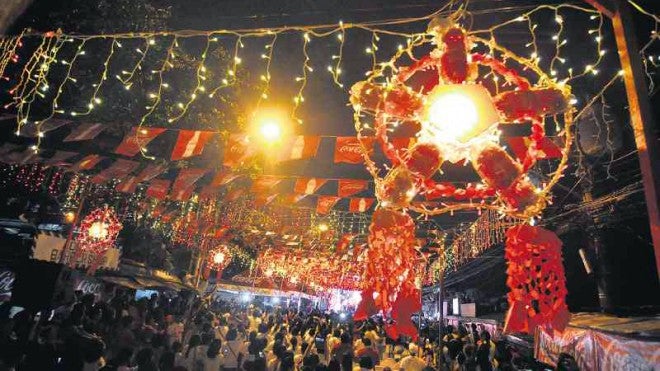 GETTING TO LOOK A LOT LIKE CHRISTMAS Festooned with Christmas decor made of recycled plastic Coke bottles, Ballecer and Miranda streets in Barangay Central Signal, Taguig City, are aglow for the season. The campaign to spread holiday cheer has been launched in key cities as part of the Coca-Cola Sari-Saring Happiness Day project. (See story on Page A8.) RICHARD A. REYES

TO BRIGHTEN Christmas all over the country, an international beverage company on Nov. 8 launched a holiday campaign in Manila, Bacolod, Tacloban, Pampanga, Batangas and Davao with Share  Sari-Saring Happiness Day participated in by more than 400,000 women small store owners.

“Coca-Cola Sari-Saring Happiness Day is an entirely new way of celebrating the season. From the big lighting ceremonies that we usually hold in the cities, we traveled to the provinces and barangays  and tapped the champions of our brand, the new icons of a unique Coca-Cola Christmas—your neighborhood sari-sari store owners,” said Jasmin Vinculado, vice president for marketing of Coca-Cola  Philippines.
“Christmas is the most celebrated season in the Philippines, so Coca-Cola mounted this campaign to recognize the women who light up our communities, and at the same time help drive sales to their  businesses.We have gone through a lot of challenges this year, so we want to send a reminder that even with the trials of every day, some truths remain the same—we can all derive happiness from  sharing and spending time with the communities and the people who matter to us,” said Adel Tamano, Coca-Cola vice president for public affairs and communications. Training, financial services

Coca-Cola Sari-Saring Happiness Day was a follow-up to the Star Program Christmas Convention—a series of events in the same six places that assembled close to 5,000 women, most of whom had been helped by the Sari-Sari Store Training and Access to Resources (Star) program. Star was launched nationwide in 2012 through a partnership among Coca-Cola Philippines, the Technical Education and  Skills Development Authority (Tesda) and microfinance institutions such as Alalay Sa Kaunlaran Inc., ASA Foundation, First Community Cooperative and Negros Women for Tomorrow Foundation to  provide womenmicroentrepreneurs access to training and financial services to grow their businesses.

Star is part of the global 5by20 Program of The Coca-Cola Co. that aims to empower fivemillion women entrepreneurs by 2020. During the Star convention, the women sari-sari store owners were given  the opportunity to connect with microfinance partners to gain access to resources that would help their businesses grow.

At the same time, they were introduced as Coca-Cola Christmas ambassadors who will bring the joy of the season to their communities. “We have learned that helping women beautify their sari-sari  stores, through merchandising and other forms of support, can significantly add to their sales. Christmas is a high volume season so there is no time more suitable tomake it happen than now,” Tamano said.

Coca-Cola Sari-Saring Happiness Day coincided with the first anniversary of Supertyphoon “Yolanda” on Nov. 8. “The Tacloban leg is most special to us because it also marks the realization of the commitment we made one year ago to help the city get back on its feet.We do not commemorate the onslaught of the typhoon.

What we want to celebrate is the resiliency of the people, to quote Taclobanons: It was humanity’s finest hour, when everyone stood up to help,” Tamano said.

For information, visit www.coca-cola.com.ph or the official Facebook page of Coca-Cola Philippines.