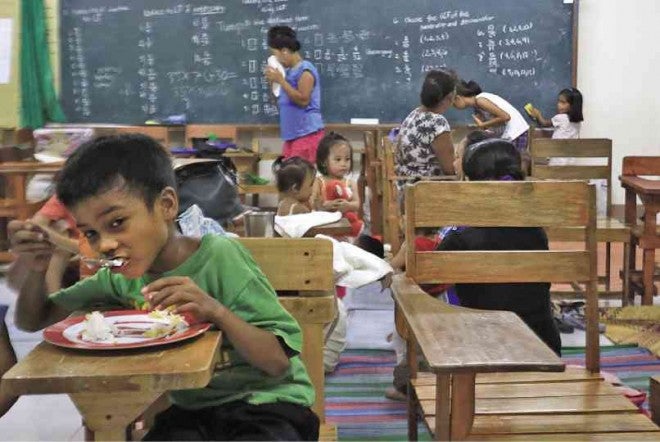 CAMALIG, Albay—Days after over a thousand evacuees along the extended danger zone of restive Mayon Volcano were sent home, officials of the just-vacated public elementary school here found that many of their classrooms had missing light bulbs.

School principal John Fajardo on Sunday said the loss was discovered only when a staff member inspected the classrooms a day after evacuees left the school, which was used as one of the 45 evacuation centers in Albay province after Mayon Volcano became restive on Sept. 15.

Those sent home on Nov. 4 amid a lull in the volcano’s movement were residents of the 7- to 8-kilometer extended danger zone.

Fajardo rued that the jetmatic pump used to provide for the water needs of the school was nowhere to be found and about 30 energy-saving light bulbs had disappeared from the classrooms.

Camalig Mayor Carlos Irwin Baldo has promised that the stolen items would be replaced, said Fajardo.

But the school principal said the theft should not have happened.

“Let’s help each other. At least, if they are evacuated again, they [would] have the [amenities] for their convenience,” Fajardo appealed to the evacuees.

The school has 272 families still from Barangay (village) Quiraray, which is located within the

These remaining evacuees also have a complaint of their own—the foul odor from school’s clogged toilets.

“The local government unit, particularly the sanitation team of the provincial health office, should take a look at this problem, as this may make us sick,” said Rezzy Santillan, one of the evacuees.

Trinidad Del Azuz, 64, said better toilets had actually been installed by the Department of Health along the same area but these were difficult to access at night, as these were about 500 meters away from the room she occupies at the evacuation center.

Evacuee Alvin Mustera said it was “difficult” to bear the foul odor but he was also aware of the need to stay put, as their safety was more important.

Mayon Volcano has been in a lull over the last two weeks but government volcanologists said they could not lower the Alert Level 3 hoisted over the volcano on Sept. 15 because an eruption remained likely.

In its bulletin released on Sunday, the Philippine Institute of Volcanology and Seismology said it detected four volcanic earthquakes in the past 24-hour observation period.