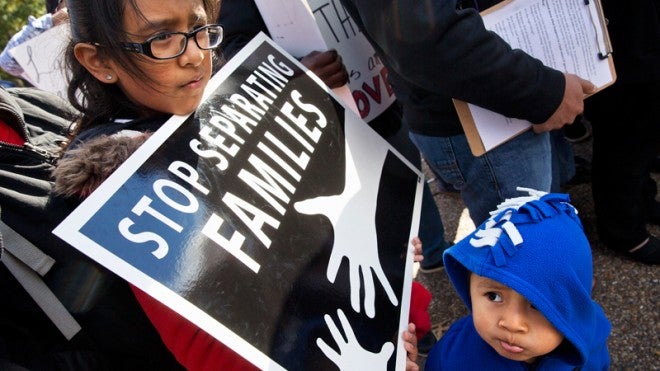 US citizens Esmeralda Tepetate, 10, with her brother Sebastian, 2, whose parents are originally from Mexico, holds a sign that says “stop separating families” during a rally for comprehensive immigration reform, Friday, Nov. 7, 2014, outside of the White House in Washington. After the midterm elections immigration groups are pushing for executive action. (AP Photo/Jacquelyn Martin)

WASHINGTON  — President Barack Obama says he intends to issue an order easing the threat against deportation for immigrants in the country illegally.

He’d act despite warnings from Republican leaders that he would be poisoning the well with a newly elected Republican-controlled Congress.

Obama tells CBS television’s’ “Face the Nation” that even if he goes ahead, there still would be room for Congress to pass immigration legislation.

He says if Congress does act, it would take the place of whatever he puts into place by his own authority.

Obama is expected to issue an order before the end of the year.