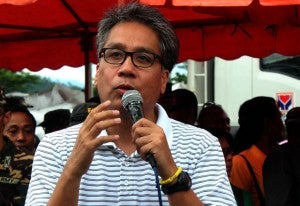 MANILA, Philippines—After receiving backlash from netizens by featuring a smiling Interior Secretary Manuel “Mar” Roxas II on its cover, Esquire Philippines denied that they are endorsing the secretary, saying that he is just “a symbol of national government response.”

“Secretary Mar Roxas is on the cover as a symbol of the national government response. Nothing less or more. We were certainly not paid or persuaded to put him on the cover,” Esquire Philippines said in a post on its official Facebook account Sunday.

Roxas is said to be the leading candidate of the administration’s Liberal Party for the 2016 presidential polls.

Esquire Philippines said that its November issue, which commemorates the first anniversary of the onslaught of Super Typhoon “Yolanda” (Haiyan), is dedicated to dignify the “memory of those lost, and the pain of those left behind in Tacloban City.”

“We at Esquire Philippines will always dignify the memory of those lost, and the pain of those left behind in Tacloban City. Our November issue is dedicated to that purpose.”

“In the issue itself, our writers and photographers revisit Tacloban in order to gather and present the very human tragedies that are still ongoing one year after Yolanda, as well as sift the facts regarding the government’s response,” the magazine said.

The editors of Esquire Philippines also urged its readers to read the features written in the magazine.

“We entreat people to read the features, to look at the images captured inside. Our goal for this issue is to draw attention, once again, to the ongoing situation in Tacloban,” Esquire Philippines ended.

The explanation provided by the editors of Esquire Philippines elicited different opinions from netizens. Some people reiterated their anger on the magazine’s choice to feature Roxas in its cover.

“You should have thought of that before putting mar roxas on the cover. He sucks. Big Fail on your cover. Yes people will judge whatever is on your cover,” commented J.r Peñaranda.

Meanwhile, some people urged other readers to look beyond the cover and read the contents of the magazine.

“Bought myself a copy yesterday.. I may have judged your choice of cover but how the inside stories were written justifies everything. Hope this issue serves as an eye opener of what is still lacking in Tacloban and other areas devastated by Yolanda,” said Shya Fermin.

I have been following this issue for the last few days and I’m happy that Esquire posted their side of the story. Although the cover could be misunderstood, I have read the articles and it gave me a lot to think about.#RememberYolanda,” Ziggy Makisig commented.

Yolanda, one of the strongest tropical cyclones ever recorded, killed more than 6,000 people and displaced millions when it struck central Philippines on November 8, 2013.