‘Money’ will go ’round 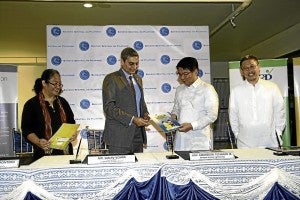 Money may or may not make the world go ’round but, in the Philippines, it is going to make the rounds—or at least the Money Matters for Kids exhibit will.

The Bangko Sentral ng Pilipinas (BSP) has accepted the donation by Citibank Philippines for its interactive exhibit designed to improve the financial literacy of children, particularly grade school students. It plans to bring the show to at least three regional offices and 18 branches throughout the country.

The exhibit, as seen from the reaction of Grade 4 students of the Doña Aurora Quezon Elementary School in Quezon City, who were special guests at the handover rites, is expected to be a big hit among children. It lets kids learn and play, even take on different roles and tasks related to money-shopping and banking, among others.

Children can make-believe they are bank managers, tellers or security guards by sticking their head into cut-out figures wearing typical clothes for the jobs they choose. If they have cameras, they can have the role-playing captured for posterity.

A mini-store lets them “buy” stuff, choosing between what they want or need. The exercise is meant to make them appreciate the difference between wants, things that are more luxury than necessities, and needs, things that are basic requirements for day-to-day living.

A “black” light allows them to verify if money (particularly old bills) is fake by revealing the watermark.

In simple ceremonies recently, BSP governor Amando M. Tetangco Jr. and Citibank country officer Sanjiv Vohra signed the Deed of Donation placing the exhibit in the care of the country’s premier financial institution. The exhibit was a joint undertaking of the Citi Foundation and Museo Pambata. First mounted at the children’s museum on Roxas Blvd. in Manila, it was also brought to a few places outside Metro Manila.

Now that BSP has placed it under its care, it is expected that the interactive show will reach even more children in a much shorter time.

Tetangco, in accepting the donation, proclaimed that the exhibit would be going places. He said the BSP was accepting “this donation in line with our advocacy on financial literacy and the activities under our integrated Economic and Financial Learning Program (EFLP).”

Currently on show at the BSP’s Metropolitan Museum on Roxas Blvd., the governor said the materials would be a great help in enriching initiatives to promote “greater awareness and understanding of essential economic and financial issues.” 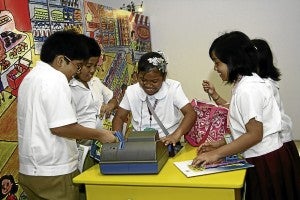 A student of Doña Aurora Quezon Elementary School tries her hand at being store cashier with her classmates as customers.

where the learning needs to take deep roots before they can eventually bear fruit.”

Tetangco added, “These exhibit materials will help the BSP to pursue its thrust to promote financial education with the end goal of imparting to the public the ability to make informed and sound financial decisions. By doing so, we expect one’s financial well-being to improve.”

He said the exhibit would be brought to elementary schools throughout the country through a mobile Fin-Ed jeep so it would be accessible to more children.

Vohra said, “Financial education is something that cannot be underestimated. It has to be promoted among people of all races, incomes and ages.”

Vohra reiterated Citibank’s commitment to promote financial literacy, citing as example a recent joint project with the Inquirer’s Learning section and BSP for a six-part series on money matters designed for high school students. The bank donated 109 Inquirer copies to every partner school to mark its 109th year of doing business in the Philippines.

A few days later, in the debriefing session with teachers who participated in the project, BSP vice governor Diwa Guinigundo reiterated that financial literacy was one of the institution’s most important projects. “An educated citizenry is the best way to ensure that policies are understood and supported,” he said.

He cited, as example, the significant change in the attitude toward saving of a growing number of overseas Filipino workers because of the financial education campaign. In 2006, Guinigundo said, savings among this group was only seven percent of remittances while there was hardly any investment. Recent data show that savings now constituted 40 percent of remittances, and 20-30 percent was invested.

Other signatories of the Deed of Donation covering the Citibank exhibit were Maricel Montero, Museo Pambata executive director, and Rafael C. Lopa, executive director of the Philippine Business for Social Progress.