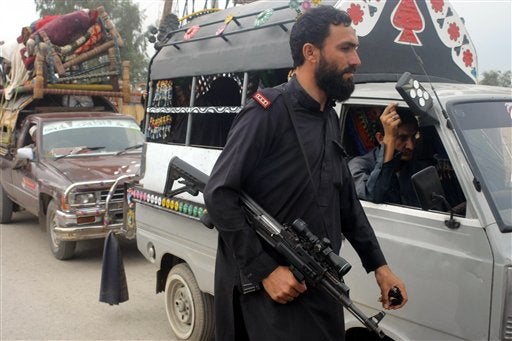 ISLAMABAD  — Pakistan on Thursday rejected allegations in a Pentagon report that it supports militant proxies in neighboring India and Afghanistan, emphasizing its own battles against militants.

The report, “Progress Towards Security and Stability in Afghanistan,” said militants continue to enjoy safe havens in Pakistan and that Pakistan uses the fighters as a hedge against its loss of influence in Afghanistan and as a counterweight to India’s superior military.

In response, Pakistan noted that its military is waging a major offensive against militants in North Waziristan, a tribal region bordering Afghanistan. Pakistan launched the long-awaited operation in June, following years of allegations that it was turning a blind eye to cross-border attacks from Pakistan on Afghan and NATO security forces. Islamabad has always denied the accusations.

“These baseless allegations in the report to the U.S. Congress are unacceptable to Pakistan,” said Foreign Ministry spokesman Tasnim Aslam. The government said it summoned U.S. Ambassador Richard Olson to the ministry on Wednesday to convey its displeasure.

The U.S. report lauded the latest Pakistani military push and acknowledged that the army had made gains against Pakistani and foreign militants. Nevertheless, the foreign ministry called the report “unsubstantial,” emphasizing Pakistan’s cooperation with the U.S. in areas of mutual interest.

Pakistan has been at war for more than a decade with the Pakistani branch of the Taliban. Last weekend, a suicide bomber attacked a paramilitary checkpoint on the border with India, killing 61 people.

The complaint came as Pakistan’s army chief met with Afghan President Ashraf Ghani in Kabul on Thursday to discuss cooperation in the fight against militants.