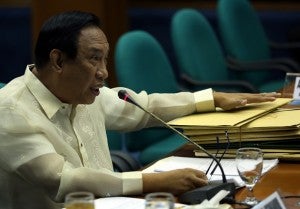 During the Senate committee hearing on the alleged corruption in Makati when Binay was mayor, Mercado showed to the panel screenshots of Binay’s purported time deposit accounts in Hongkong Shanghai Banking Corporation (HSBC) in Hong Kong from 1989 to 1994.

Mercado said the time deposit accounts were owned by Binay but managed by Gerardo “Gerry” Limlingan and Eduviges “Ebeng” Baloloy, two of Binay’s alleged long-time aides at the time the supposed corruption in Makati happened.

However, Senator Aquilino “Koko” Pimentel III said the accounts would not be part of the records because Binay’s alleged undeclared wealth was not part of the investigation.

Mercado has testified that both Binays earned kickbacks in various infrastructure projects in Makati when the Vice President was mayor.

Binay would rather talk to people rather than attend Senate ‘circus’