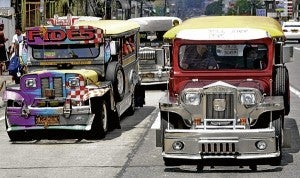 MANILA, Philippines–Students may soon seek penalties for public transport drivers who refuse to give them fare discounts once this bill becomes law.

The House of Representatives has passed on third and final reading a bill seeking student fare discounts and imposing penalties on violators.

House Bill 5068 entitled “An Act institutionalizing the grant of student fare discount privileges on public transportation and for other purposes” seeks a 20 percent discount for students on the regular domestic fares of all forms of public transportation provided that they present valid IDs or enrollment forms.

The discount is in effect only during school days.

Students who will be denied a discount may file a complaint with the Land Transportation Franchising and Regulatory Board for land transportation, Maritime Industry Authority for water or sea travel, Civil Aeronautics Board for air transporation, Department of Transportation and Communications legal service for rail transit systems, and the local chief executives for tricycles.

The following penalties will be imposed:

* a one to three-month suspension from first to third offense for the drivers,

* a three-month suspension and a P1,000 penalty on subsequent offenses,

* and a P1,000 fine on the owner or operator of the transportation facility;

* and P20,000 for a third offense for the owner, operator and its employees, with an additional P10,000 on top of the penalty for subsequent offenses;

*and P10,000 for a third offense,  with an additional P5,000 on top of the penalty for subsequent offenses.