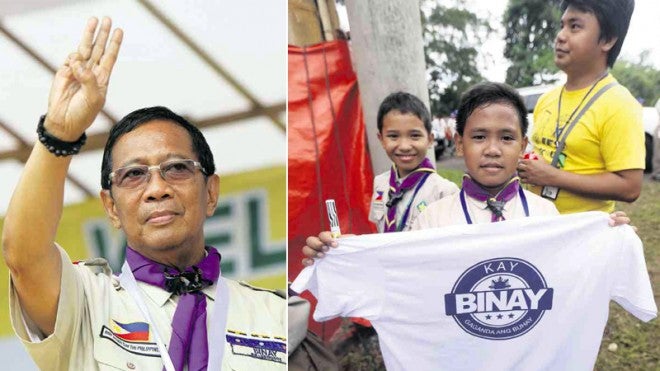 POLITICAL ‘HUNGER GAMES’ Vice President Jejomar Binay flashes the Boy Scout salute at the opening ceremony of the Philippine Scouting Centennial Jamboree for Luzon at the Boys Town Complex in Marikina City. At right, a Boy Scout shows a T-shirt bearing the face of Binay, president of the Boy Scouts of the Philippines for 20 years now. LYN RILLON

MANILA, Philippines–Amid allegations of corruption against him, Vice President Jejomar Binay on Tuesday asked Boy Scouts to treat him as an ordinary citizen and not as someone being crucified on the cross by his political enemies.

“And I hope you do not treat me as one Jojo Binay, our country’s Vice President, who is being forcibly crucified and punished for sins made up by detractors and deceivers,” he said, referring to corruption allegations against him which he has dismissed as lies and politically motivated. (Jejomar is taken from the names Jesus, Joseph and Mary.)

A day after President Aquino told him to give him solutions instead of criticisms, Binay, Boy Scout of the Philippines (BSP) president, said he did not want to talk about politics.

Speaking before BSP delegates at the Boys Town complex in Marikina City, Binay said he wanted “to act, think and talk just like an ordinary citizen” with fellow Boy Scouts.

“I wish I could renounce politics,” Binay said. He told his listeners that he wanted them to treat him instead as a fellow Boy Scout serving the country.

Later in the day, Binay talked politics when he met with Manila Auxiliary Bishop Broderick Pabillo to defend himself against the corruption allegations.

Still wearing a Boy Scout’s uniform, Binay arrived a little past 2 p.m. at Arzobispado de Manila in Intramuros, the Catholic Bishops’ Conference of the Philippines (CBCP) headquarters, where his closed-door meeting with Pabillo took place.

Pabillo would have wanted to keep the meeting a secret but it was apparently Binay’s camp that informed the media about it.

The Vice President declined to be interviewed by the media after his speech at the BSP gathering.

Binay also ignored the media as he stepped out from a two-hour meeting with Pabillo, despite an assurance earlier in the day that he would answer reporters’ questions.

Pabillo neither gave any interview to the media.

A source, who requested anonymity for he was not authorized to divulge information to the media, said Binay “clarified issues hurled against him.”

“Bishop Pabillo and the others present during the meeting only listened to him,” the source said.

The ‘truth’ on Senate probe

He said Binay also gave Pabillo a paper titled “The Truth about the Senate Blue Ribbon Subcommittee Hearing,” belying all the allegations against him.

“He said it was politically motivated,” the source said.

The Senate blue ribbon subcommittee has been investigating allegations that Binay pocketed kickbacks from infrastructure projects and other deals awarded to favored contractors during his watch as Makati City mayor.

He is also accused of owning a P1.2-billion, 350-hectare high-end farm in Rosario town, Batangas, by using dummies.

The source refused to say if the explanation of the Vice President managed to satisfy Pabillo, head of the public affairs office of the CBCP, and the others present during the meeting.

Apart from Pabillo, also present were two priests and members of the Association of Major Religious Superiors in the Philippines.

The source said Pabillo met with Binay in the spirit of fairness.

Pabillo earlier said that the door was open for the Vice President and others to give their side of the story after he met with seven whistle-blowers, who have accused Binay of graft.

The prelate earlier met with former Makati City officials who have accused the Vice President of enriching himself from kickbacks in the city government’s infrastructure projects, including the allegedly overpriced Makati City Hall Building II, now the subject of the blue ribbon subcommittee probe.

Binay has denied the allegations, saying these were all political noises aimed at destroying his bid for the presidency in 2016.

The Manila auxiliary bishop also took the opportunity to discuss with Binay the housing issue since the Vice President handles the administration’s housing concerns.

While Binay opted not to delve into politics at the BSP event, his camp was not as quiet.

“A debate has ground rules. A debate is a forum to inform, not to harass or intimidate. It is a forum for a sober presentation of arguments, not a bully pulpit. It is not a one-sided political circus like the ongoing Senate witch-hunt being conducted by Senator Trillanes,” Salgado said in a statement.

“But we do suspect that by imposing a deadline on the Vice President and the KBP, Senator Trillanes is laying the predicate for backing out of the debate. He knows fully well that given a forum for sober, calm and informed discourse, he will never win the debate,” he said.

Trillanes said that there was still a long list of anomalies that Binay had to answer for.

“He was mayor for 21 years then he passed on the practices to his wife and son. They have had a stranglehold on Makati for the last 28 years,” Trillanes said.

Another anomaly, according to Trillanes, was the alleged hiring of several “ghost employees” when Binay was mayor of Makati.

Trillanes said it was likely that the Senate investigation would revisit the allegedly overpriced birthday cakes for Makati’s senior citizens.

He said there was no deliberate attempt by senators to stretch the hearings until the campaign season of 2016. Binay is among those expected to run for President.

But the list of anomalies was simply too long, Trillanes said. “That is one thing I guarantee him (Binay), there will be more to come,” Trillanes said, adding that the Senate probe of the anomalies would likely continue even beyond April next year.

Binay camp asks: ‘Is Trillanes backing out of the debate?’