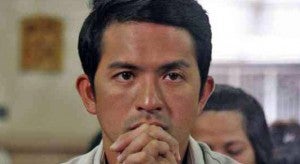 A side collision between two school buses in Quezon City sent six minors to the hospital early Tuesday morning, including the son of actor Dennis Trillo.

The drivers of both vehicles remained in police custody at press time as the Quezon City Police District (QCPD) prepared to charge them on behalf of the children’s parents.

Slightly injured like most of their passengers, neither of the drivers admitted being at fault for the smashup, though an initial investigation showed that they were both speeding when they crashed into each other in an “accident-prone” crossing, an official said.

A report from QCPD’s traffic office said the service vehicles—one carrying pupils of Xavier School and the other that of Malayan High School of Science—figured in a collision at 5:45 a.m. at the intersection of Speaker Perez and N. Roxas Streets in Barangay Lourdes.

Chief Insp. Diogenes Amor, head of the QCPD Balintawak traffic sector, said most of the children on board suffered abrasions and were brought to either the Chinese General Hospital or Jose Reyes Memorial Medical Center for treatment.

Trillo’s seven year-old son Calix, who was a passenger in the Xavier vehicle, did not appear to have any injuries but was still brought to the hospital to be examined, Amor said. The boy is the actor’s child with Carlene Aguilar, a former Binibining Pilipinas pageant winner.

Passing through Speaker Perez toward Banawe, the Xavier pupils’ school bus was then being driven by Rasmur Padios, 24, and had four passengers aged 7 to 12.

The Malayan-bound vehicle was being driven by Jerry Lito Papa, 45, on Roxas Street going to Tuazon with two fifteen-year-olds on board.

Amor said the impact of the collision was so strong that both vehicles veered off the road after hitting each other. The Malayan vehicle ended up slamming into a concrete wall while the Xavier van crashed into an electrical post.

The drivers Padios and Papa, who blamed one another for the accident, both face charges for reckless imprudence resulting in multiple injuries and damage to property. “We will file a case against both of them on behalf of the parents of the victims. It will be up to the prosecutor to determine who’s liable,” Amor added.

Trillo’s manager, Popoy Caritativo, said the actor was “just thankful that Calix was not injured.” With a report from Bayani San Diego