ZAMBOANGA CITY, Philippines – Mayor Maria Isabelle Climaco-Salazar has ordered a stop to the construction of houses under the Z3R (Zamboanga City Roadmap to Recovery and Reconstruction) program after a section of a house being built collapsed last Sunday. 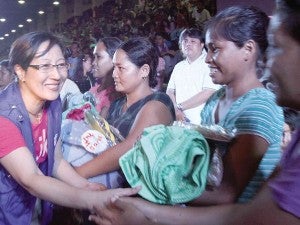 A portion of a house under construction on Lustre Street in Sta. Catalina village collapsed following strong wind on Sunday afternoon.

Indanan told the Inquirer the house in question had been accidentally hit by a backhoe on Oct. 30 and collapsed only last Sunday.

Indanan said he had ordered the unit demolished and rebuilt, but workers failed to implement the demolition as Nov. 1 and 2 were holidays.

Indanan said the cost of the demolition and reconstruction will be shouldered by Bilrey Construction, the contractor for the project.

Of the 158 houses to be built at the Lustre Homeowners Subdivision, at least 57 are undergoing construction. Turnover of the housing units is scheduled next January.