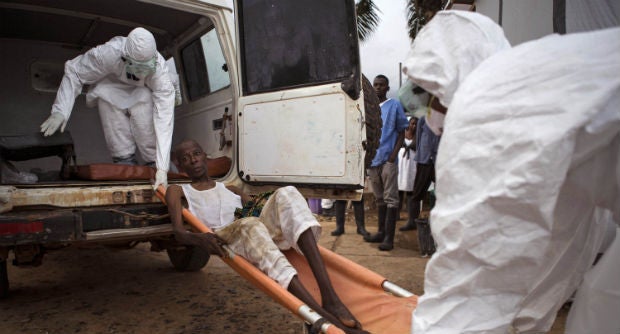 In this file photo taken on Wednesday, Sept. 24, 2014, Healthcare workers load a man, center, onto an ambulance as he is suspected of suffering from the Ebola virus in Kenema, Sierra Leone. A doctor in Sierra Leone has died of Ebola — the fifth local doctor in the West African nation to die of the disease, authorities said Monday, Nov. 3, 2014. AP

FREETOWN, Sierra Leone — A doctor in Sierra Leone has died of Ebola, the fifth local doctor to die of the disease there, authorities said Monday, as UNICEF announced it was doubling its staff in the three West African nations hard hit by the deadly virus.

The death of Dr. Godfrey George, medical superintendent of Kambia Government Hospital in northern Sierra Leone, was a blow to efforts to keep desperately needed health workers safe in a country ravaged by the world’s worst Ebola outbreak.

At the United Nations in New York, Ebola coordinator Dr. Peter Salama of UNICEF said the U.N. children’s agency would double its staff from 300 to 600 in Guinea, Liberia and in Sierra Leone, where children make up 20 percent of all Ebola cases. About 4,000 children have been orphaned by Ebola, he said.

“Schools are closed, children are confined to their homes and discouraged to play with other children,” he said.

“Death is all around them,” Salama added.

The World Health Organization says the disease has killed some 5,000 people and infected more than twice as many.

Sierra Leone’s health care system was already fragile before the Ebola epidemic because of past conflict and a lack of resources. The country had two doctors for every 100,000 people in 2010, compared to about 240 doctors for the same number of people in the United States, according to WHO.

George’s overnight death was announced by Dr. Brima Kargbo, Sierra Leone’s chief medical officer. George had been driven to the capital, Freetown, after reporting that he was not feeling well.

Doctors and nurses have been particularly vulnerable to contracting Ebola, as the virus is spread through body fluids.

Sierra Leone has seen a shift in the outbreak recently. Infections in areas in the country’s east, which were the first affected, have slowed, and cases have instead increased in and around the capital. On Monday, the government reported 51 new, confirmed cases in the two districts in the country’s west that include Freetown, while just one in the two eastern districts that used to be most affected.

To combat the disease, more international help is needed, but regular people also need to change their behavior, said Anthony Banbury, head of the U.N. mission on Ebola. Health officials have repeatedly warned that to stop transmissions people must stop touching the sick and dead.

“If people do not change their behavior, more people will continue to die,” Banbury said, while visiting the country Monday.

Ebola is high on the agenda of a regional meeting of the World Health Organization that opened Monday in Benin, a West African nation that has not had any Ebola cases.

The Ebola epidemic has set back political stability and economic recovery in the afflicted countries, WHO chief Margaret Chan told the meeting. She also noted the disease’s “heavy toll on front-line domestic medical staff.”