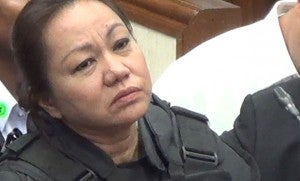 MANILA, Philippines — If the whistle-blowers in the P10-billion pork barrel racket knew what they were doing was illegal, why did they continue colluding with suspected fund scam brains Janet Lim-Napoles?

The head of the Sandiganbayan division handling the plunder and graft cases brought against detained Senator Jose “Jinggoy” Estrada posed this question on Monday, to Napoles’ former bookkeeper who admitted participation in the elaborate scheme to defraud the government of billions of pesos in public funds.

Associate Justice Roland Jurado, chair of the anti-graft court’s Fifth Division, grilled Mary Arlene Baltazar as she returned to the witness stand in the continuation of the hearing of Estrada’s bail petition.

Apparently surprised by the justice’s questions, the diminutive witness paused for a few moments as she appeared to be carefully contemplating on her answer.

“At that time, I thought I cannot find other work, which would offer the same salary I was getting from Napoles,” Baltazar said in a mix of English and Filipino.

Baltazar, who said she received P50,000 in monthly salary as bookkeeper of Napoles’ various companies and foundations, admitted that she agreed to be president of a bogus nongovernment organization upon the instruction of Napoles.

She also owned up to listing her children and brother-in-law as trustees of the fake foundation, which received pork barrel allotments from lawmakers.

Baltazar’s admission apparently got the attention of Jurado and Associate Justice Alexander Gesmundo, who both quizzed her about her particular responsibilities as bookkeeper of Napoles.

“Isn’t it more difficult for your children (to be dragged into this case) because you included them as trustees?” Jurado asked the witness.

To which Baltazar replied in a firm voice: “I just went with the flow.”

During the direct examination conducted by State Prosecutor Hazel Decena-Valdez, Baltazar said she helped prepare the financial statements, general information sheets, payroll and other documents regarding the operations of Napoles-owned NGOs.

Baltazar, who worked for Napoles from 2004 until the pork barrel controversy caught the public’s ire in 2013, also admitted forging signatures on documents pertaining to the disbursement of pork barrel funds funneled to the bogus foundations of Napoles.

Read Next
Jinggoy Estrada warns Binay against appearing in Senate hearing
EDITORS' PICK
Gear up and get ready to play with Yamaha Mio Gear
Over 3 Million worth of prizes to be won at Smart Padala’s SENDali Manalo Promo!
Octogenarian jailed for ‘stealing mangoes’ freed after people chip in for bail
Gov’t eyeing COVID-19 tests in pharmacies
Acer starts the year off strong with the Aspire Vero National Geographic Edition
Being a celebrity isn’t wholly an ‘advantage’ in the election, says Sotto
MOST READ
Imelda Marcos trends on Twitter after octogenarian jailed for allegedly stealing mangoes
Help pours in for octogenarian jailed for ‘stealing’ mangoes in Pangasinan
Natural immunity more potent than vaccines during US Delta wave—study
SSS: Members on home quarantine due to COVID-19 can apply for sickness benefit
Don't miss out on the latest news and information.