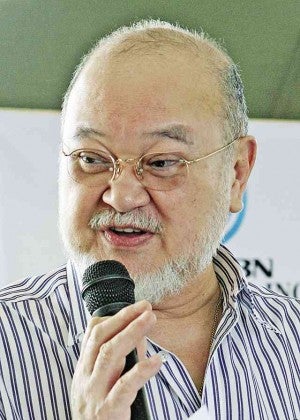 ILOILO CITY, Philippines—The Ombudsman has indicted former Iloilo Rep. Augusto “Boboy”Syjuco for another graft case, this time in connection with alleged anomalies in the release of P3.241 million in fertilizer funds in 2004.

In a 40-page joint resolution approved by Ombudsman Conchita Carpio-Morales on Oct. 10, a copy of which was furnished the Inquirer only on Friday, the antigraft body also found probable cause against nine former and incumbent officials of Alimodian town in Iloilo, including Mayor Geefre Alonsabe, for alleged violation of Republic Act No. 3019, the Anti-Graft and Corrupt Practices Act.

In its resolution, the Ombudsman said there was a conspiracy among the respondents to channel the fertilizer funds and allow the implementation of the project through a cooperative linked to Syjuco.

The Ombudsman said in its resolution that the actions of the respondents, including the purchase of fertilizer from the chosen supplier of the cooperative, “clearly indicate a conspiratorial design to favor the cooperative…, deception of the government and complete disregard of the principles of accountability, responsibility and accountability.”

The case stemmed from a complaint filed by former Iloilo provincial administrator Manuel Mejorada, Syjuco’s former chief of staff, who accused the respondents of irregularities in the implementation of the Farm Inputs and Farm Implement program of the Department of Agriculture.–Nestor P. Burgos Jr.