Prosecutor in Laude slay shakes off ties to ‘Nicole’ case 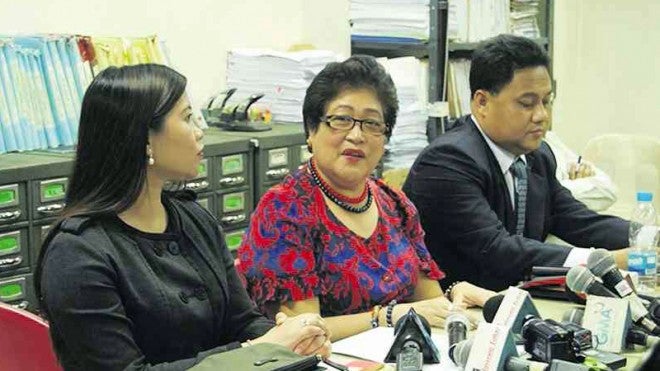 LAUDE CASE Olongapo City Chief Prosecutor Emilie Fe de los Santos (center) is under the spotlight as she leads the prosecution team in the killing of transgender woman Jeffrey “Jennifer” Laude, allegedly by a US Marine. ALLAN MACATUNO/INQUIRER CENTRAL LUZON

OLONGAPO CITY, Philippines—People glued to their television sets for developments in the Oct. 11 murder of Jeffrey “Jennifer” Laude would not have missed the feisty Chief Prosecutor Emilie Fe de los Santos.

In front of cameras, De los Santos berated police investigators for their apparent indecision as to what evidence best supported the complaint against detained US Marine Pfc. Joseph Scott Pemberton in connection with the brutal slaying of the Filipino transgender.

De los Santos also barked at one of Pemberton”s lawyers, Rowena Garcia Flores, for trying to “tell her what to do” in the preliminary investigation that began on Oct. 17.

Flores brought a motion to “declare the absence of probable cause for murder or any other crime”against Pemberton. “If prosecutors elevate the case to court, Pemberton asked that the murder charge be reduced to homicide considering the lack of circumstances qualifying the offense to murder,” Flores said.

“We will rule on probable cause after completing the process and getting all pieces of evidence from the complainant … don’t teach us what to do,” De los Santos told Flores. “At this point we will not be guessing if this is murder or homicide.”

De los Santos remains an enigma to this city, although she has handled some of the more well-publicized legal cases not only in Olongapo but also in Manila.

In 2006, she served as senior state prosecutor in the rape complaint against Lance Cpl. Daniel Smith on behalf of a Filipino woman named “Nicole.” Smith later was acquitted after the woman recanted.

De los Santos has expressed hopes her association with the Nicole rape case would not impinge on the Laude case, associates said.

Assistant City Prosecutor Ria Niña Leanor Sususco quoted De los Santos as saying during a discussion of the case, “If we will keep on going back to Nicole rape case and Daniel Smith, we will just be confused.”

Sususco told the Inquirer the city prosecutor had directed the prosecution panel to treat the Laude case separately from that of Nicole’s. “She said every case is different and that Daniel Smith is no longer part of this case so we will concentrate on Pemberton,” Sususco added.

In an Oct. 20, 2006, letter to then Justice Secretary Raul Gonzalez, The Outstanding Women in the Nation’s Service (TOWNS), which assisted Nicole in her complaint, accused De los Santos of carrying out a “deliberate effort to sabotage” the rape case against four US Marines, including Smith.

“We attest to the unprofessional and irrational treatment accorded by Senior State Prosecutor Emilie Fe de los Santos to Nicole, her family and the private prosecutors,” TOWNS chair and former Sen. Leticia Ramos-Shahani and its president, Imelda Villar, wrote Gonzalez.

“What clinched our suspicion that there was a deliberate attempt to sabotage the case was the fact that it was State Prosecutor Nolibien Quiambao, the most junior, least experience[d] [member of the team] … who was assigned the most crucial cross-examination [of principal accused, Smith].”

The group claimed to have verified that De los Santos tried to pressure Nicole’s mother into negotiating with the US government or risk having the case leveraged to acquire custody over a former Philippine official hiding from graft charges in the United States.

“We believe that [De los Santos] should be removed from the sensitive task forces organized by the DOJ and to which she has been assigned because she has neither the temperament nor the expertise to win cases,” the TOWNS officials said.

In December 2006, a Makati Regional Trial Court judge found Smith guilty of rape and sentenced him to life imprisonment. The three other US Marines were acquitted. In April 2009, the Court of Appeals reversed the decision of the Makati court and ordered Smith’s release.

Last week, Nicole’s private lawyer Evalyn Ursua said De los Santos should not ignore the similarities in the cases of Nicole and Laude.

“There is the same foreign element: The crime was committed allegedly by a US soldier on Philippine soil under the VFA (Visiting Forces Agreement),” Ursua said.

But De los Santos, in a media interview, said she believed that the United States would cooperate in the investigation because American authorities had been attending the preliminary probe.

“The presence of US authorities during the preliminary hearing signals that they will cooperate,” she said, referring to Cmdr. Timothy Stone of the US Navy regional legal service who attended the proceedings on Oct. 27.

De los Santos has said she would focus on the “criminal aspect” of the case.

“What is clear is that a person is dead and it’s not about the gender,” De los Santos told the lead lawyer of Laude’s family, Harry Roque, who asked that the victim be referred to in the proceedings and documents as “Jennifer.”

“Let’s also put an end to the issue that there is bias in the gender. There’s no gender issue here. The issue is: Somebody got killed,” she said.

Prosecutor: US should provide Pemberton DNA

‘The issue is the killing’

Read Next
Go home, some Mayon evacuees told
EDITORS' PICK
10 Filipinos positive for COVID-19 in UK, 7 in Ireland — envoy
Nograles: Cabinet members to donate 75% of monthly salary to aid COVID-19 fight
Quick chat with Nicole Andersson: ‘You really don’t need much to be happy’
IATF to LGUs: Issue ordinances vs attacks on frontliners, COVID-19 patients
Diokno to Duterte: OK to make fun of buck tooth, but focus on people’s needs first
Robredo spox thanks Duterte for defending VP’s efforts vs COVID-19
MOST READ
Coronavirus hotbed Rizal to shut borders on April 6
Gov’t mulling quarantine period extension of 15-20 more days
ADB warns PH against prolonged lockdown
Sotto on Isko Moreno’s call: We do our job without the media following our every move
Don't miss out on the latest news and information.