MANILA, Philippines —  The wife of Vice President  Jejomar Binay had allegedly  signed  a document identifying herself as the  owner of the  controversial property in Batangas,  former   Makati Vice  Mayor  Ernesto Mercado told a Senate hearing  on Thursday.

Testifying at the  Senate  blue  ribbon  subcommittee on Thursday,   Mercado said Binay’s wife and former  Makati Mayor  Elenita Binay signed a letter dated  September  10,  1997 allegedly pertaining  to the  “architectural design services “ and “scheduled of fees” for  the construction of a rest house in Rosario town,  in Batangas province. 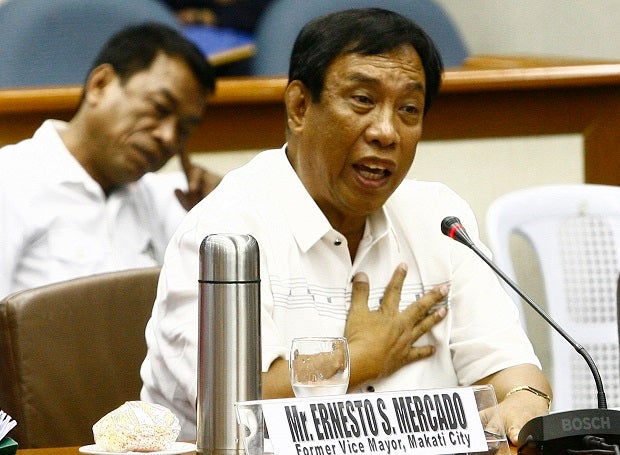 Mercado also  showed another letter-proposal  from  the former  engineer of the  city government, Renato Mandrique, for the purchase of two units of grinder discs to be used at the Agri-Fortuna farm.

He said Mandrique made another request  for new  water  tanks for a piggery  in Rosario, Batangas.

The Vice President’s camp  had earlier  admitted  that  he had  a piggery   farm  in  the controversial property in the province but said he divested  his interest  of the  farm in 2010.

While he said he was  not sure that the  city  government was the  one that paid for all the  expenses,  Mercado noted that the price quotations were all addressed to  the city hall.

The Vice President had repeatedly  denied owning the Batangas property.