Binay: ‘The Lord will take care of my detractors’ | Inquirer News

Binay: ‘The Lord will take care of my detractors’ 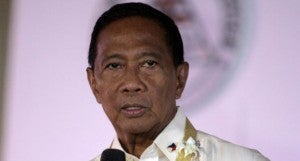 MANILA, Philippines—Vice President Jejomar Binay said he is turning to a higher power to “take care” of his political detractors.

Binay, in an interview in Camarines Sur Tuesday, expressed his frustration over the unabated attacks against him and his family.

(You know, I thought that the face of politics in the country would finally change. But no. Slandering your rivals and their families and spreading lies are still the norm. The Lord will just take care of my (detractors).)

The Vice President is at the center of the allegedly overpriced construction of the Makati City Hall 2 parking building, which has been the subject of an ongoing investigation at the Senate. He has also been accused during the hearings of allegedly receiving kickbacks and amassing unexplained wealth when he was the mayor of Makati City.

Binay strongly denied all allegations leveled against him.

Despite the allegations, the Vice President remained hell-bent on running for president in 2016.

(You know I am not a hypocrite. From the beginning, I already said I was running for higher office.)

He even thanked the people there in rain-drenched Camarines Sur who came to see and greet him despite the charges against him.

(I thought no one would welcome me because of the defamation that I have received. Even my color was criticized. They would call me ‘nognog’ (dark-skinned). Through the media, I would like to extend my gratitude to those who gave me a warm welcome amid the rains.)