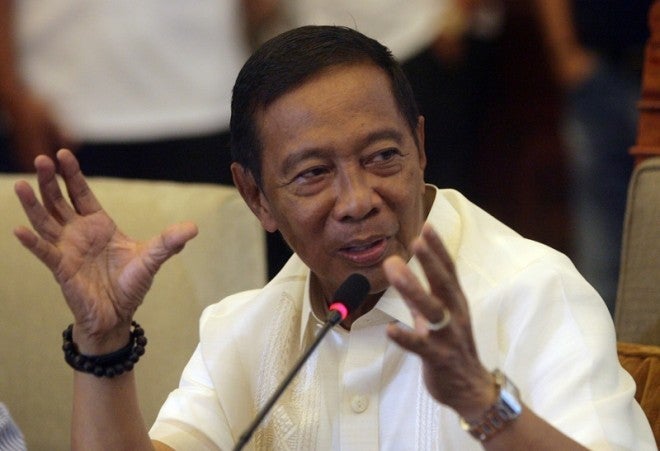 MANILA, Philippines–The camp of Vice President Jejomar Binay on Monday said the demolition job on him was part of a plot to destroy his chances in 2016 hatched by a group that includes Interior Secretary Mar Roxas and Senate Majority Leader Alan Peter Cayetano, both of whom have presidential ambitions.

And the alleged link between Roxas and Cayetano is the helicopter used in taking pictures of the so-called Hacienda Binay in Rosario town, Batangas province.

The helicopter is allegedly owned by a close associate of Roxas. It allegedly carried an employee of Cayetano’s wife, Taguig Mayor Lani Cayetano, at the Taguig City Hall when former Makati City Vice Mayor Ernesto Mercado took aerial pictures of the property on Oct. 2.

Mercado is the principal witness in a Senate blue ribbon subcommittee inquiry into allegations of corruption and hidden wealth against Binay. It was he who told the inquiry last week that Binay owned the 350-hectare property in Batangas, estimated to be worth Pl.2 billion.

Interviewed on ANC’s “Headstart” program hosted by Karen Davila, Bautista said “Nognog” was how operatives of the Liberal Party (LP) referred to the Vice President.

Nognog is the name of a small, dark-skinned boy in an eponymous cartoon strip popularized by cartoonist Leandro San Juan Martinez in the 1960s and 1970s.

The first is to bring out Mercado and lawyer Renato Bondal to testify in the ongoing Senate inquiry into the allegedly overpriced Makati City Hall Building II.

The second aim is to make senators speak out against Binay in the course of the inquiry, not only Cayetano but also Sen. Antonio Trillanes IV and Senate President Franklin Drilon.

Bautista said the third aim was to launch a “massive media offensive” against Binay in a bid to “destroy his image and reputation and lessen his chances of winning the presidency.”

He said the content of the operation was disclosed to UNA by unimpeachable sources who had information about it and who were sympathetic to Binay.

On the ANC program, Bautista said his evidence on the helicopter was the flight plan for that trip.

He said the helicopter was owned by a known associate and a financier of Roxas, billionaire Buddy Zamora, who is in the mining business. It is co-owned by Eric Gutierrez, who is a mining business partner of Caloocan Rep. Edgar Erice. Erice is an LP member known for speaking out against the Binays.

He said UNA learned the ownership of the helicopter from sources in political circles.

Bautista said Roxas was known to have used a fixed-wing aircraft owned by Zamora when he campaigned for the vice presidency in 2010.

On Cayetano’s link to the chopper trip, Bautista told Davila that UNA learned that one of the three passengers was Dexter Estacio, a graphic artist working in the Taguig City Hall.

Cayetano was not available for comment as of press time Monday night.

Asked how UNA could prove the chopper was the same helicopter that took the photos, Bautista said: “It’s their call. Deny it to death if they want, but we have the document.”

The document is the flight plan that Bautista said he got from investigative reporters sympathetic to Binay.

He told the Inquirer that based on the flight plan, the chopper, with body number RP C4926, took off at 12:30 p.m. on Oct. 2 and was bound for Alfonso town, Cavite province, and Rosario, Batangas.

It was the chopper that was spotted by people on the Batangas property who reported the flight to Binay’s camp.

Asked why Roxas and Cayetano would team up against Binay, he said: “You know, the enemy of my enemy is my friend. The target of these people is to destroy the chances of the Vice President to become the next president in 2016. So what they’re doing is that they are cooperating right now. This is something tactical.”

Commenting on Bautista’s remarks, Erice said Roxas and the LP had nothing to do with the supposed demolition job on Binay.

“Mar is completely blind in all of these issues. He has nothing to explain because he has nothing to do with these. I suggest that Vice President Binay tell his men to check their facts before making any accusations,” Erice said in a phone interview.

Erice confirmed that he was a friend and business partner of Gutierrez who was into mining, construction and sales of heavy equipment.

But he said Bautista was given a bum steer when he claimed that the Eurocopter EC-130B-4 used to take aerial photos of the Batangas property belonged to   Gutierrez and Zamora.

“He (Bautista) should have checked the flight records first before making any statement. Gutierrez does not own that chopper,” Erice said.

He said Bautista should also be more discerning and consider that the Nacionalista Party’s Cayetano himself had presidential ambitions and that the Zamora brothers were his main backers.

Erice said Bautista was just showing his “incompetence” by resorting to diversionary tactics after running out of excuses and lies to reboot Binay’s shrinking credibility.

House Speaker Feliciano Belmonte Jr., a vice chair of the LP, was surprised that Bautista linked the party to the three senators—Cayetano, Trillanes and Aquilino Pimentel III—who are the main players in the Senate inquiry.

“Among the three senators investigating him (Binay), who is an LP or even pro-Mar? Nobody. Pimentel has been his associate for years until he took in Miguel Zubiri. Cayetano’s issues revolve around rivalry between Taguig and Makati. Trillanes’ beef with Binay is the coup d’etat he launched in the city,” Belmonte said in a text message.

“More than denials that are easy to make, his group should just answer the allegations squarely,” Belmonte said. “We assure him that the House will not investigate the Vice President.”

“The LP is too focused on helping President Aquino carry out his mandate of good governance. UNA should not divert the issue. It should confront the issue of corruption head on,” Evardone said.

Iloilo Rep. Jerry Treñas said Bautista should just answer the allegations against the Vice President instead of muddling the issues raised by pointing to the LP for his group’s misery.

Jojo Binay is not a malignant spirit