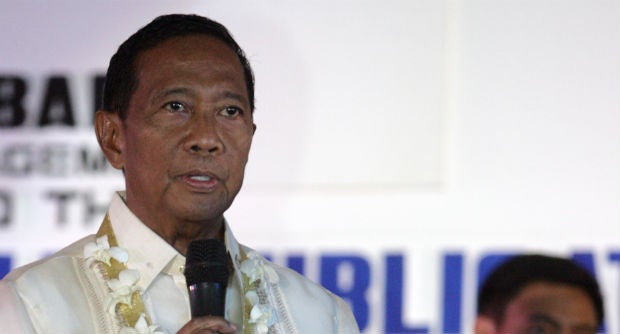 MANILA, Philippines–Are the political detractors of Vice President Jejomar Binay being paid to continue attacking him?

“Those criticizing me are having a feast. With each attack, there is something like a jukebox,” Binay told reporters in Filipino in Lucena City, referring to the dropping of coins on the music machine before it plays a selected song.

Asked by the Inquirer on what should the Senate blue ribbon committee do to convince him to attend the ongoing Senate hearing that he repeatedly ignored, Binay replied: “I heard I will be invited by the mother committee. I will wait if it is true I will be invited. We will talk later if I receive an invitation.”

To attend or not

When reminded that Senate blue ribbon committee Chair Teofisto Guingona III publicly issued the invitation to him last week, Binay said he had yet to receive the formal invitation.

Binay said that should he receive the formal invitation for him to appear before the committee, he “will still study whether to attend the hearing or not.”

On Oct. 22, Guingona and the Senate blue ribbon committee formally asked the Vice President to attend the Senate hearing to be conducted by the committee members.

Guingona made the invitation in response to the challenge made by Binay’s camp that the Vice President would face the Senate only if the invitation would come directly from the mother committee.

A Senate blue ribbon subcommittee led by Senators Aquilino Pimentel III, Antonio Trillanes IV and Alan Peter Cayetano is investigating allegations of corruption against Binay, including overpricing of the P2.28-billion Makati City Hall Building II, pocketing kickbacks from infrastructure projects when he was mayor of the city, and using dummies to conceal his ownership of real estate properties in Makati and Rosario town in Batangas province.

Binay vehemently denied all the allegations against him and his family, saying it was all part of a grand political demolition scheme to sabotage his victory in the 2016 presidential election.

Binay has yet to see an ally abandon the United Nationalist Alliance (UNA) despite a barrage of corruption allegations against him.

Parañaque Rep. Gustavo Tambunting and Buhay Rep. Lito Atienza said that the way the Liberal Party and the media had painted as doomed Binay’s presidential bid, UNA membership should have been decimated by now.

Tambunting and Atienza issued the statement in reply to Cavite Rep. Elpidio Barzaga Jr.’s claim that the corruption charges against Binay would make it difficult for UNA to attract formidable senatorial candidates.

“I think there is no question that he (Binay) will pursue his candidacy. The question is can he put up a credible Senate slate?” Barzaga asked.

Tambunting said that there were indications that Binay’s supporters would desert him. “It’s possible (there will be defections) because anything is possible in politics. But so far, we have yet to lose any of our allies,” he said.

He noted that there were at least 15 strong applicants jostling for 12 seats in UNA’s senatorial slate in 2016.

Tambunting said that some of them were incumbent members of the Senate and the House of Representatives while others were formerly from the two chambers.

“The situation is very fluid but we have remained intact despite the negative press our leader has been getting,” said Tambunting.

Atienza was confident that Binay would bounce back after suffering a decline in his rating in the Pulse Asia survey from 41 percent in June to 31 percent in September.

“I think the public has had enough of leaders who have no experience. What they will be looking for is competence for the job and the Vice President has no peer in that department,” Atienza said.