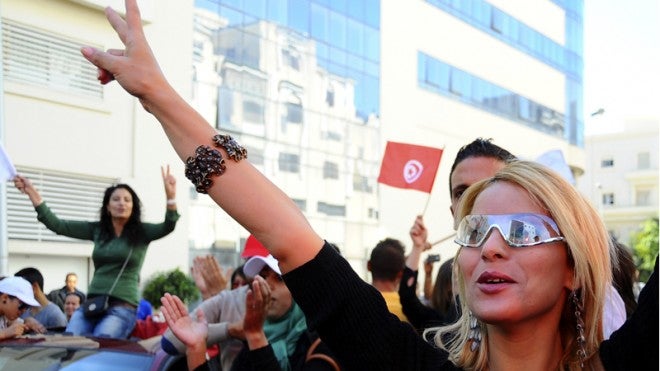 TUNIS, Tunisia — Tunisia’s well-organized Islamists have been defeated in parliamentary elections, paying the price for their turbulent years of power after the Arab Spring that saw the rise of terrorist groups in this North African nation.

Voters sought security and stability with familiar faces from Tunisia’s more authoritarian past, but the Islamists’ substantial weight in the new parliament will make them a player in any future government.

Results from the official election commission were trickling in, with only 10 Tunisian districts reported by Tuesday. But exit polling and statistical sampling of voting station results by observer groups have produced a remarkably uniform picture with the liberal party Nida Tunis (Tunisia Calls) taking an estimated 35 percent of the seats of the parliament, giving it the right to form a governing coalition.

The Islamists came second with around 25 percent of the seats, a major drop from the 42 percent they held in the outgoing parliament.

Nida Tunis, which is now well-placed for presidential elections in November, presented itself as the answer to the moderate Islamists of the Ennahda Party, which had struggled to guide the country through post-revolutionary turmoil in a coalition with two left-wing parties. Critics charged the Islamists with being soft on terrorists and incompetent managers.

“I promise only one thing and that is to re-establish the state,” Beji Caid Essebsi, the 87-year-old founder of Nida Tunis, said in an interview on national TV late Monday. “All our problems resulted from the lack of a state.”

Essebsi was a foreign minister in the 1980s, under the country’s first post-independence president Habib Bourguiba, and was briefly interim prime minister in 2011, after the revolution. Essebsi evokes the good old days of Tunisia, with a strong economy and a focus on education — while ignoring its authoritarian aspects.

The party tapped into voters’ fear of instability, and a 24-hour standoff between counterterrorism forces and suspect militants in a Tunis suburb just two days before elections reminded people of the turmoil of the past three years.

“It’s order and nationalism,” Michael Ayari, an analyst with the International Crisis Group, said of the election result. “It was the desire to restore the authority of the state and the fear of terrorism.”

The party matched the Islamists’ grassroots strength by tapping into networks once used by the the old regime to keep tabs on people in every village and neighborhood.

“They used that network, the people who used to staff these offices and knew where everyone was,” said Laryssa Chomiak, director of the Center for Maghreb Studies. “They were knocking on people’s doors, they basically replicated the Ennahda (electoral) machine from 2011.”

Tunisians had more than 100 parties to choose from, but the race largely boiled down to voters who still had faith that the Islamists could govern the country and those choosing the party strong enough to oppose them.

Nida Tunis is a wide tent, with businessmen, trade unionists and many politicians from the rule of deposed dictator Zine El Abidine Ben Ali, and there are questions about how cohesive a party it will be once it gains power.

With the next-highest vote-getters polling just around 5 percent of the vote, putting together a governingcoalition without the Islamists — as Nida Tunis has repeatedly promised to do — could be quite a feat of politicalhorse trading.

The Islamists may end up having just 10 to 15 seats fewer than Nida Tunis in the 217- member parliament, making them difficult to ignore, especially since they won’t be running a presidential candidate and Essebsi may look for their endorsement when he runs for the top office on Nov. 23.

For its part, Ennahda has conceded defeat and promised to work with constructively with any new government. Supporters celebrated outside its party headquarters late Mondaynight what it called a “victory for all Tunisians.”

“The whole Arab world wishes they were Tunisian, so enjoy all these freedoms,” party founder Rashed Ghannouchi told the cheering crowd as it chanted his name.

Amer Laarayedh, a senior Ennahda leader, said the first party to take power after every revolution has to “pay the price.” He said Ennahda’s popularity suffered as it dealt with the post-revolutionary turmoil and high expectations, even as it put in place a new political system and constitution.

“If we hadn’t taken that responsibility, there would have been no constitution, no parliament and not even these elections,” he said.