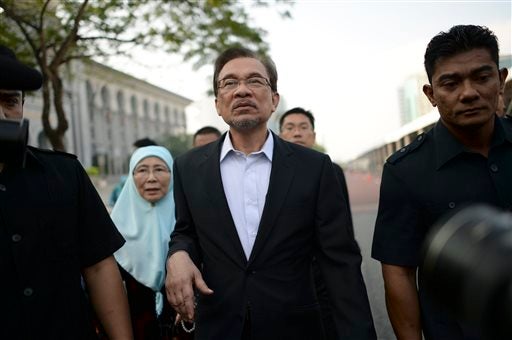 Malaysian opposition leader Anwar Ibrahim, center, walks with his wife Wan Azizah as they arrive for his final hearing of his sodomy conviction in Putrajaya, Malaysia, Tuesday, Oct. 28, 2014. AP

PUTRAJAYA, Malaysia— Malaysia’s top court on Tuesday began hearing a final appeal filed by opposition leader Anwar Ibrahim against a sodomy conviction widely regarded as a means to neutralize the threat he poses to the country’s ruling coalition.

Anwar was sentenced to five years in prison in March on charges of sodomizing a male aide in 2008 after Malaysia’s appeals court overturned an earlier acquittal.

“I am confident of winning the case if we have judicial independence,” the 67-year-old said before entering the Federal Court, where around 200 of his supporters had gathered. “I’m mentally prepared, but I don’t have much hope.”

Critics and independent human rights activists say the case against Anwar is the latest salvo in a long-running campaign by Malaysia’s coalition government to silence its most potent threat. The US government and other Western governments have expressed concerns over his treatment.

“This trial is so unjust,” Anwar’s wife, Wan Azizah Wan Ismail, said outside the courtroom. “We hope and pray that justice will be served, not just for Anwar but for all Malaysians.”

Sodomy, even consensual, is a crime in Muslim-majority Malaysia and is punishable by up to 20 years in prison.

If he loses the appeal, Anwar would also be banned from running for office for five years from the day he is released from jail.

Prosecutor Muhammad Shafee Abdullah said a ruling would not come until at least Thursday.

Anwar was previously imprisoned for six years after being ousted as deputy prime minister in 1998 on earlier charges of sodomizing his former family driver and abusing his power. He was freed in 2004 after the Federal Court quashed that sodomy conviction.

A guilty verdict could weaken the opposition and trigger tensions over who should head it.

Anwar led a three-party alliance to unprecedented gains in 2008 elections and made further inroads in 2013 polls. Najib’s National Front coalition won with a slimmer majority and lost the popular vote to the opposition.

“Malaysia’s sodomy law seems to exist chiefly to persecute Anwar Ibrahim,” said Phil Robertson, deputy Asia director at Human Rights Watch. “This drawn-out political theater has long been exposed as an attempt by the government to take Malaysia’s most senior opposition leader out of political contention.”