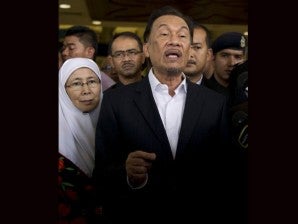 KUALA LUMPUR—Malaysian opposition leader Anwar Ibrahim was convicted of sodomy Friday in a fresh threat to the career of a charismatic politician who helped turn around the country’s once-hapless opposition.

Saying a lower court misjudged evidence, a Court of Appeals panel ruled in favor of the government’s bid to overturn Anwar’s 2012 acquittal on charges he sodomized a male former aide.

If the decision holds, Anwar would be disqualified from parliament, effectively ending his remarkable career.

His lawyers say they will appeal to the Federal Court, Malaysia’s highest.

Anwar, 66, who dramatically fell from the pinnacle of Malaysia’s long-ruling party in the late 1990s amid controversial charges of sodomy and corruption, condemned the ruling.

“All over again, after 15 years, they want to put me in the lockup, and that is why they are rushing,” Anwar said after the verdict.

Sodomy is illegal in Muslim-majority Malaysia.

The latest charges were brought by the government shortly after Anwar—who had served six years in prison—led the opposition to what was then its best-ever showing in the 2008 polls.

Anwar has called the drawn-out trial and subsequent appeal a political ploy by a ruling regime fearful of his success in the opposition and bent on tarnishing his image.

The decision sparked an uproar in a courtroom filled with Anwar’s opposition colleagues and supporters, as his wife and three daughters burst into tears.

“We are (of) the view that the learned judge had failed to properly appreciate evidence from the prosecution and misdirected the integrity of the samples,” Judge Bahi Yusuf Wahi said on behalf of the three-man bench. A sentence had yet to be handed down.

A charismatic campaigner and speaker, Anwar was a rising star in the ruling United Malays National Organisation in the late 1990s, reaching as high as deputy prime minister.

But in 1998 he was sacked amid a power struggle with his boss, strongman ruler Mahathir Mohamad, and jailed on the earlier sodomy and corruption charges.

Critics of Malaysia’s authoritarian regime have accused the government of a consistent campaign to keep Anwar and other opposition figures off-balance by harassing them with legal charges. AFP