Fraternity members allegedly belonging to the Aquila Legis and the Fraternal Order of Utopia traded blows after the final installment of the Bar exams at the University of Sto. Tomas in Manila Sunday, Oct. 26, 2014. Manila police have since filed charges against those involved in the fistfight. Video by Cathy Miranda/INQUIRER.net

MANILA, Philippines – The Manila Police have filed charges against two fraternity members who were arrested after engaging in a fistfight during the traditional “Salubong” which marked the last day of the 2014 Bar examinations Sunday.

The police identified the two fraternity members as James Francis Villanueva and Jason Cabrera of the Ateneo Law School and Arellano University, respectively.

Police Superintendent Mannan Muarip, station commander of Manila Police Station 4, said that they filed alarm and scandal charges against the two who were involved in the fistfight, along with other members of Aquila Legis fraternity and the Fraternal Order of Utopia.

Villanueva and Cabrera underwent inquest proceedings Monday, a day after they were arrested.

Members of the two fraternities got into a brawl after both camps allegedly hurled insults against each other while waiting for the bar examinees to finish.

INQUIRER.net contacted the two schools for their statements regarding the incident.

A representative from the Office of the Dean of Ateneo Law School who was not authorized to speak on behalf of the school told INQUIRER.net in a phone interview that the Aquila Legis and Utopia fraternities are not officially recognized by the school.

Meanwhile, a representative from the Arellano University Law School dean’s office said that the school could not confirm if Cabrera is their student. They also refused to comment on the brawl as they have not yet received a report on the incident. 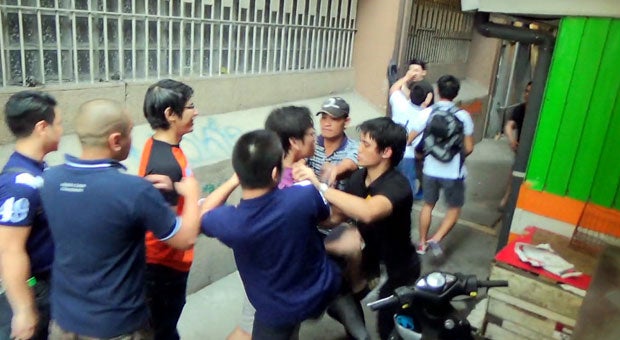 Fraternity members allegedly belonging to the Aquila Legis and the Fraternal Order of Utopia traded blows after the final installment of the Bar exams at the University of Sto. Tomas in Manila Sunday, Oct. 26, 2014. Manila police have since filed charges against those involved in the fistfight. Cathy Miranda/INQUIRER.net

357 back out of gruelling bar exams, says SC

Read Next
Former SC justices differ on Bangsamoro constitutionality
EDITORS' PICK
UK’s Boris Johnson will resign, BBC reports
Unemployment rate up to 6% in May
Geek out at TOYCON 2022 powered by Smart Signature
High inflation: Your P1 is now worth only 87 centavos
High-risk pregnancy: Reducing your risk is in your hands
House energy committee chair Arroyo bats for cheap electricity
MOST READ
Suspect in grisly killing of missing woman in Bulacan arrested
Kim Atienza’s daughter flaunts bikini body in response to critics of her ‘revealing photos’
Number of active COVID-19 cases in PH breaches 11,000
Ex-Defense chief Lorenzana is the new BCDA chair
Don't miss out on the latest news and information.