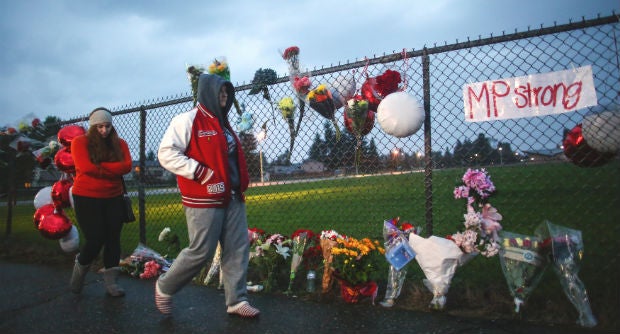 A memorial grows Saturday Oct. 25, 2014 at the entrance to Marysville Pilchuck High School the day after a shooting in the school cafeteria left two dead and four wounded. The shooter was among the dead. AP

MARYSVILLE, Washington – Three students fought for their lives in Seattle-area hospitals Sunday, days after being shot in the head during an attack at a high school on Washington state’s Puget Sound.

The close-knit community, meanwhile, on the nearby Tulalip Indian reservation struggled with the news that the shooter was a popular teenager from one of their more well-known families.

A tribal guidance counsellor said no one knows what prompted 14-year-old Jaylen Fryberg to walk into a busy school lunchroom and open fire Friday.

“We can’t answer that question,” said Matt Remle, who has an office at Marysville-Pilchuck High School. “But we try to make sense of the senselessness.”

Churches have held vigils since the attack that killed one student and wounded four others, including two of Fryberg’s cousins, and gatherings were planned Sunday afternoon in the high school gym and at a tribal center.

In the nearby community of Oso, where a mudslide this spring killed dozens, people planned to gather to write condolence letters and cards.

The girl killed in the shooting hasn’t been officially identified.

Fryberg died in the attack, after a first-year teacher intervened. It’s unclear if he intentionally killed himself or if the gun went off in a struggle with teacher Megan Silberberger.

The Snohomish County medical examiner’s office said it was unlikely to have autopsy results before Monday.

Remele said he knew Fryberg and the other students well.

“My office has been a comfort space for Native students,” he said. “Many will come by and have lunch there, including the kids involved in the shooting.”

They all were “really happy, smiling kids,” Remle said. “They were a polite group. A lot of the kids from the freshman class were close-knit. Loving.”

These factors make the shooting that much more difficult to deal with, “Maybe it would be easier if we knew the answer,” Remle said. “But we may never know.”

Read Next
Heed lessons of climate change, gov’t urged
EDITORS' PICK
Climate Change Commission and Nestlé PH to discover sustainability-focused solutions
Gordon calls 2 Pharmally execs ‘Senate fugitives’ after no-show in probe
Legarda emphasizes role of ICC/IPs in nation building this IP month
NCR’s COVID-9 alert level may be downgraded from 3 to 2 soon — DOH
Isko Moreno bares ‘two-pronged’ approach to rehabilitate MSMEs
What’s at stake for every fighter at ONE: NextGen
MOST READ
LJ Reyes says Paolo Contis made ‘no efforts’ to talk to her after their split
Despite being called arrogant, Yang says he ‘loves’ PH and ‘loves doing business here’
PDP-Laban Cusi wing Senate bets willing to give way to Duterte
Drivers with no traffic violations can now renew licenses for 10 years
Don't miss out on the latest news and information.