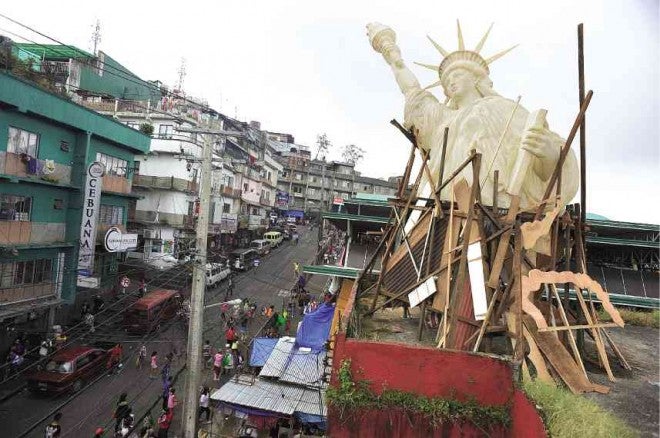 ARTISTS from Baguio City and Manila assembled pieces of installations and distributed these along Baguio City Public Market, including this giant Statue of Liberty towering over Kayang Road. The artists are offering these pieces to anyone willing to barter with commodities of equal value, like sacks of rice and vegetables that the artists need in their daily lives. EV ESPIRITU/INQUIRER NORTHERN LUZON

BAGUIO CITY—A trip to the Baguio City market became an interesting chore for parents and their children on Sunday.

Many children chuckled with delight as soon as they saw a giant fiberglass version of the Statue of Liberty towering over the market. Further up the Hilltop area in

Nearby, along the driveway of an open market area called Block 4, market-goers may be startled by headless fiberglass statues, one representing an indigenous Filipino and another representing a Caucasian man. These were set side by side a statue of a Negrito by installation artist Marta Lovina.

The liberty statue by Kawayan de Guia and the other eye-catching installations led people to three market stalls displaying artworks and trinkets for sale.

Here’s the catch: These art pieces could be exchanged for goods of equal value. Some artists prefer a kilogram of rice; others want a new set of art materials.

Observers assumed this collaborative art project, called “Markets of Resistance,” was an attack on capitalism. Others took note of the timing of the art project because 2015 means the official start of free trade among members of the Association of Southeast Asian Nations (Asean), which local food producers dread.

“We are not anticapitalist,” said the exhibit’s organizer, New York-born Angel Velasco-Shaw.

But the project’s experiment with barter trade will help people examine the various economic forces that rule the lives of the average Filipino, said Shaw, the director of the School of Fine Arts and Design’s Institute for Heritage, Culture and the Arts at Philippine Women’s University (PWU).

She said some of these economic principles were imposed by colonizers, like the United States in the 20th century, and needed to be studied because of their continuing influence on modern governance.

Shaw said the Asean economic integration was also a timely topic arising from the project because the Philippines still relies economically on its migrant workers.

“Some of my students are children of OFWs (overseas Filipino workers),” she said.

“There is no perfect system. Some forms of trade, unfortunately, [lead to] dishonesty and opportunism,” Shaw said.

But people also need to reflect that everyone is a consumer who would pursue the best value for the least price, she added.

That the artworks inspire various interpretations about the economy “is precisely the discourse we wanted to start,” Shaw said.

PWU financed the market installations, a series of painting, poetry and interactive programs, and the barter of artwork produced by eight PWU students and Baguio artists, including photographer Tommy Hafalla. The exhibit will last until Nov. 9.

Many of the installations do not hide its political sentiments.

De Guia’s Lady Liberty, installed atop Rillera Building in the market, is entitled “De Liberating a Fall” and challenges the concept of liberty.

Lovina’s installation, “Fantasy World,” is meant to express the question: “Do we ever really think about who is looking back at us?”

 Shaw said she learned only recently that “Markets of Resistance” is an economic term, referring to market factors that tend to obstruct the rise of prices.

The art project, she said, was based on an insight that the only place to understand a people is through their public markets.

“The culture, the life force of a community is not in the supermarkets … I love markets. Markets are thousands of years old,” Shaw said.

The barter idea has drawn mixed reactions from the market community.

But the curious have wandered into the artists’ stalls and have offered to buy food and paint brushes to exchange for the art pieces they liked.

One patron had in fact left an “IOU” (I owe you), in exchange for a drawing that the artist sold for “love.” Vincent Cabreza, Inquirer Northern Luzon