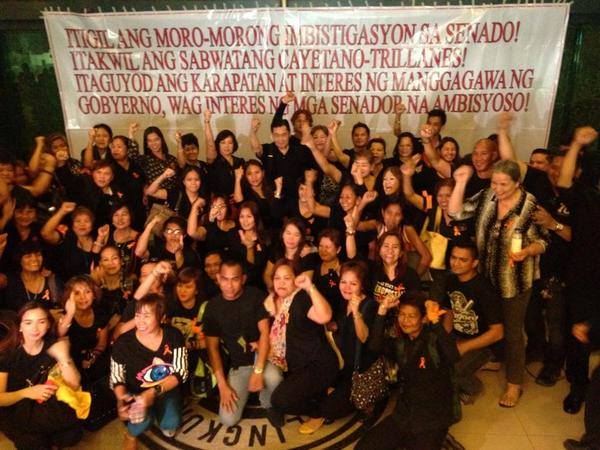 For the first time, Vice President Jejomar Binay, accused of amassing ill-gotten wealth, on Thursday appealed to his supporters to continue to rally behind him.

“Wala po tayong iwanan (Let’s not abandon each other),” Binay said in a radio interview in Pagadian City, a transcript of which was given to Manila-based reporters.

“It started in 2010. You continued to support us with Sen. Nancy Binay. Now I appeal to you, huwag ho kayong maniwala sa paninira (don’t believe the smear campaign against us).”

Binay said the businessman who was being accused as his dummy for a property in Batangas province was able to defend himself from senators investigating the allegations of corruption against him.

He was referring to Antonio Tiu who defended his ownership of a 150-hectare Batangas property before the Senate blue ribbon subcommittee, although it was found that his ownership was not yet a done deal.

The Vice President lamented that senators in the subcommittee would hit witnesses for being his dummies if they would say they were not his supporters.

He slammed anew the “demeanor” of senators at the hearings as well as the fact that the inquiry had widened from the allegedly overpriced Makati City Hall Building II to allegations he owned the Batangas farm and other properties.

“It’s a kangaroo court,” Binay said, adding that the Senate subcommittee was no longer engaged in investigation but in smearing his reputation.

The Vice President reiterated that he did not own the Batangas farm and that all the allegations being hurled against him were old charges going back to the time when he was mayor of Makati.

Binay said he had challenged Sen. Antonio Trillanes IV to a public debate on the allegations against him.

But he said he wanted to tell the senator whether he would want to hold their debate inside a military camp so people could find out who the senator was.

“You find that by talking to other people in uniform, you will know who Mr. Trillanes is,” Binay said.

The Vice President did not spare his potential rival in the 2016 presidential race, Interior Secretary Mar Roxas, as he linked him anew to a plot to stop his presidential bid.

He said Roxas should come clean on his presidential plans, noting that unlike him, he declared early on that he was eyeing the presidency.

He reiterated that Roxas had a hand in the smear campaign against him, citing that the helicopter that flew over the Batangas farm was owned by a financier of the secretary and that his staff member was one of the passengers of the helicopter.

Roxas has denied any role in the alleged plot.