Senator Revilla: I earned all my money from movies
By: Marlon Ramos - Reporter / @MRamosINQ
Philippine Daily Inquirer / 01:40 AM October 24, 2014 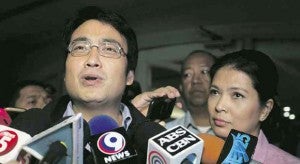 NO LOOSE CHANGE Detained Sen. Bong Revilla says the millions of pesos he is accused of pocketing from his pork barrel fund allocations is loose change compared with the money he has earned from his movies.

That was how detained Sen. Bong Revilla described the millions of pesos in public funds which government prosecutors claimed the senator had pocketed as kickbacks from his participation in the P10-billion pork barrel scam.

Speaking with reporters after attending his bail hearing in the Sandiganbayan on Thursday, a smiling Revilla said that the testimony of the Anti-Money Laundering Council (AMLC) investigator failed to prove that he had amassed ill-gotten wealth and that he was confident that the court would grant his bail petition.

“I have done over 100 movies and all those films earned profits. Not one of my films flopped in the box office. I earned the amounts they mentioned during the hearing legally,” Revilla said in Filipino.

“Modesty aside, the amounts the prosecution accused me of stealing were loose change for me. I worked hard to provide for my family. My wife and I worked hard for what we have now,” he added.

Though AMLC investigator Leigh Von Santos admitted that there was no documentary evidence linking the “suspicious” deposits made to the bank accounts of Revilla and his family members to the company owned by suspected pork barrel racket mastermind Janet Lim-Napoles, he told the Sandiganbayan First Division that Nature Concepts Development and Realty Corp., a company owned by the senator’s wife, Cavite Rep. Lani Mercado, was a company used by the couple to launder his commissions from the fund scam.

Grilled by defense lawyer Joel Bodegon during the cross-examination, Santos disclosed that large amounts of cash were suspiciously deposited into the account of Nature Concepts although the company did not have any business dealings during the period the transactions were made.

“Nature Concepts is a dummy corporation. There were several deposits to its bank account although it was no longer operating,” Santos said.

“The deposits were made in cash. The company was (established) only for money laundering,” he added.

Asked by Michael Ancheta, counsel of Richard Cambe, Revilla’s coaccused and former political aide, the AMLC investigator returning to the witness stand in the continuation of Revilla’s bail hearing admitted that there was no document showing the money deposited into Cambe and Revilla’s bank accounts came from JLN Corp., a company that Napoles owned.

In his previous testimony, Santos said the AMLC discovered that more than P87.6 million in cash was deposited into the personal accounts of Revilla, his wife, their children and some of his siblings.

The AMLC said the amounts were deposited near the dates when primary whistle-blower Benhur Luy claimed he had given Revilla’s kickbacks to Cambe in cash.

The AMLC also discovered that a total of P27.745 million was deposited in 2010 into the account of Nature Concepts, which only had a minimum paid-up capital of P62,500 when it was formed by Mercado in March 2006.

But Revilla lambasted the government prosecutors for supposedly conveniently changing the total amount that he allegedly embezzled from state coffers.

The senator said the “truth has started to unravel” as he expressed confidence that his defense counsels were able to debunk the accusations hurled against him.

Revilla is facing plunder and graft charges for allegedly pocketing more than P224.5 million of his Priority Development Assistance Fund (PDAF) allotments from 2007 to 2009.

Along with fellow Sen. Jinggoy Estrada, Revilla has been locked up at the Philippine National Police Custodial Center in Camp Crame, Quezon City, since the Sandiganbayan ordered his arrest last June.

“Initially, they claimed I got P1.2 billion (from Napoles). Then they accused me of stealing P500 million. It then went down to P400 million and to P200 million,” he said.

“Then they said I had P87 million (in my bank accounts). During last week’s hearing, (the prosecution) said I earned P72 million,” he said.

Asked to comment on Santos’ claim that Nature Concepts was a dummy corporation, Revilla said the company controlled by his wife was a realty firm and that its transactions were all aboveboard.

“Everything is legal. We will discuss that (Nature Concepts) before the court. We’re not hiding anything. I have declared that in my SALN (statement of assets, liabilities and net worth),” Revilla said.

“The truth is slowly coming out. I’m sure the people know who is Bong Revilla and where I came from,” he said.

Director Joefferson Toribio, head of the Ombudsman prosecution team, belittled Ancheta’s and Bodegon’s argument that Santos’ failure to present documents linking the deposits to Revilla’s accounts to Napoles’ company only proved that the senator did not benefit from the PDAF scam.

“With the testimony of Santos, I think the burden (of proof) has shifted for the defense to explain. And we are eagerly awaiting their explanation,” Toribio said.

He argued that there was “no justification” for the cash transactions involving the bank accounts owned by Revilla and those of his family members.

He said Santos’ failure to submit documentary evidence pertaining to the deposits was understandable since Napoles gave Revilla’s kickbacks to Cambe in cash.

“Remember that there are witnesses who testified that they directly gave the money in cash to Richard Cambe,” Toribio said.

Asked if the testimonial evidence was enough to warrant the junking of Revilla’s bid to post bail, he said: “Of course.”

Taking the witness stand for the prosecution, Luy and fellow witnesses Merlina Suñas and Marina Sula testified that they gave big amounts of cash to Cambe, who allegedly collected Revilla’s “rebates” or kickbacks from the projects funded by the senator’s PDAF.

In a separate interview, Bodegon said the defense might opt to forego presenting its own witnesses to expedite the bail hearing and instead file a formal offer of evidence.

He accused the prosecution of presenting its evidence in a “very traditional” way which, he said, was contrary to the Supreme Court’s previous decisions that bail hearings should be summary in nature.

“Four months is too long for a bail hearing. We’re studying if we still have to present witnesses because as of now, we think it’s not necessary. For us, the prosecution did not present strong evidence against Senator Revilla,” Bodegon said.

“But we need to study that very carefully because this is a nonbailable offense. Plunder is a serious offense. That’s why we still have to discuss if we have to present our own evidence,” he said.