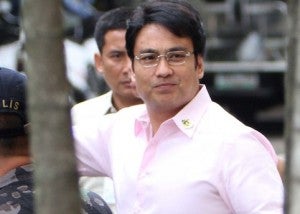 MANILA, Philippines–The bail hearing of Senator Ramon Revilla Jr. is nearing conclusion as state prosecutors are set to present their last witness against the lawmaker who is being tried for plunder and graft charges.

National Bureau of Investigator forensic expert Joey Narciso was supposed to testify Thursday but state prosecutors said he was hospitalized for dengue.

The Sandiganbayan first division adjourned the bail hearing early. It will resume on October 30.